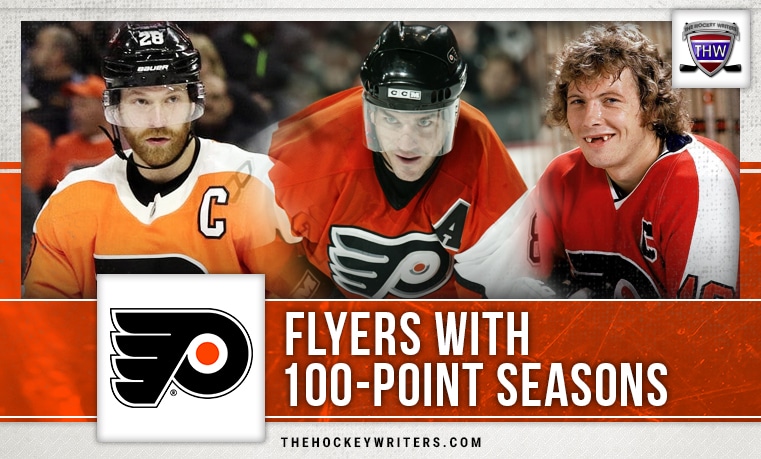 From the rough-and-tumble 1970s to the modern-day NHL, a half-dozen Philadelphia Flyers’ players have recorded 100-plus points in a single season.

Here’s a look at all six of them — undoubted Flyers’ royalty, in every case — that accomplished the fantastic feat since the team began as an expansion franchise in 1967.

The first Flyer to record 100-plus points in a season was Bobby Clarke, a 5-foot-10 centre from Flin Flon, a small mining town in northern Manitoba, Canada.

The Flyers gambled in taking Clarke — who many teams feared would be unable to play professional hockey because he had type-1 Diabetes in an era where people knew little about the blood disease — 17th overall in 1969.

“At that time people knew very little about the disease,” Clarke recalled in 2006 during a conversation with Slava Malamud. “As far as I know, none of the clubs except Philadelphia even asked the doctors for any explanations. Everybody just decided that if there was something wrong with your health, then you are not NHL material. During the first training camps I had some seizures, but the team doctor worked out a special diet for me and since then everything was okay.”

That special diet included a lot of glucose, including cans of Coke and glasses of juice with five teaspoons of sugar in them. The only thing sweeter than those drinks is how sweetly the gamble to take Clarke paid off — he is widely regarded as the greatest Flyer ever and one of the NHL’s all-time greats.

The mop-headed, firebrand Clarke — whose skill set combined crafty playmaking, clutch goal scoring, and a feisty, irritating demeanour that embodied the Flyers’ “Broad Street Bullies” era — was the first player on an expansion squad to reach the 100-point plateau. He did so in 1972-73, when he recorded 37 goals and 67 assists.

“Clarke’s talent and truculence were inseparable,” wrote Stu Hackel in a special piece for NHL.com outlining Clarke’s illustrious career in black and orange. “The glue that bonded the two sides of Clarke’s game was an incomparable work ethic, a personality trait to which all Flyers had to measure up. He made sure those who skated with him did just that.”

Clarke’s 1972-73 season was just the start of a stretch of dominance for him and his team: while he didn’t reach 100 points in 1973-74, he was integral in helping the Flyers become the first expansion franchise to capture the Stanley Cup. He recorded 16 points in 17 playoff games and scored the overtime-winner in Game 2 of the Final against the Boston Bruins.

Clarke recorded 116 points in 1974-75, as the Flyers once again hoisted Lord Stanley’s Mug. He then outdid himself in 1975-76 while playing on the lights-out “LCB Line” with Reggie Leach and Bill Barber, recording 119 points and an almost unthinkable plus-83 rating.

While Clarke never reached triple digits again, he remained a consistent point producer and fearsome leader until he retired after the 1983-84 season. At the time he hung them up, he was 11th all-time in NHL points with 1,210 and still owns several Flyers records, including most games played, most assists, most points, and the best plus/minus rating.

Over his 15 seasons, he was named an NHL all-star eight different times and captured a huge list of hardware, including a Bill Masterson Trophy, Frank J. Selke Trophy, three Hart Memorial Trophies, the Lester B. Pearson Award, and a Lester Patrick Award.

Immediately after retiring, he became the Flyers general manager and spent 19 of their next 23 seasons in the role before resigning in 2007. He is still with the team at age 70, acting as the senior vice president.

Those two — Rick MacLeish and Bill Barber — were also huge contributors to the back-to-back Cup victories and the Flyers’ collective identity.

Like Clarke, MacLeish recorded 100 points (an even split of 50 goals and 50 assists) in 1972-73. While Clarke reached 100 on March 3, MacLeish did it on April 1 with a goal against the Pittsburgh Penguins.

The left-handed shooting centre with a deadly wrist shot never captured 100 again but came oh-so-close in 1967-68 when he led the team in scoring but fell three short of 100. He also led the Flyers in goals and points in both of their championship runs — 13 goals 22 points in 1974 and 11 goals and 20 points and 1975.

MacLeish played 14 total NHL seasons, 12 with the Flyers, before retiring in 1984 with 759 points to his name. He passed away at age 66 in 2016 from meningitis, and kidney and liver failure.

“Ricky was the most talented player the Flyers had during the 1970s,” Bobby Clarke said after his teammates passing. “Life after hockey wasn’t fair to Ricky. He left us far too soon.”

Bill Barber, meanwhile, cracked 100 in 1975-76 with Clarke and Leach on the aforementioned “LCB Line” by recording 50 goals and 62 assists that season. Like Clarke, Barber spent his entire career with the Flyers and recorded 883 points over 12 seasons.

After being inducted into the Hockey Hall of Fame in 1990, Barber became a Flyers assistant coach for three seasons before becoming head coach of AHL affiliate Hershey Bears and helping them capture the Calder Cup in 1998. After winning the 2001 Jack Adams Award as Flyers’ head coach, he captured his third Stanley Cup in 2004 as the Tampa Bay Lightning’s director of player personnel. Now 67, Barber has served as a Flyers scouting consultant since 2008.

After putting up 113 points and winning the Stanley Cup with the Pittsburgh Penguins in 1990-91, the Flyers traded for the left-handed right winger the following season.

He played just two full seasons in the City of Brotherly Love before being traded to the Montreal Canadiens but both were 100-plus point campaigns. He is the only Flyer other than Clarke to accomplish the feat multiple times.

Recchi returned to the Flyers between 1998-2004 and was a steady producer, but never hit 100 points again. His 1,652-game career, which spanned 22 seasons and included three Stanley Cup victories, culminated in him being inducted into the Hockey Hall of Fame in 2017.

“The Next One” tallied 115 points in 1995-96, his first of three seasons centring the “Legion of Doom” line with Mikael Renberg and John LeClair. He’d flirted with 100 before and had fallen just three short in his sophomore 1993-94 campaign, three years after the blockbuster trade where the Flyers snagged the 1991 first-overall pick from the Quebec Nordiques for a veritable king’s ransom in return.

The next season, Lindros’ production dropped to 79 in the regular season, but he led the Flyers with 26 playoff points in their run to the Stanley Cup Final, where they were swept by the powerhouse Detroit Red Wings.

Lindros easily would have accomplished the feat earlier if not for the lockout that shortened the 1994-95 season to a 48-game slate — he won the Hart Memorial Trophy and racked up 70 points in just 46 games. That’s 1.52 points per game and equals 124.64 over 82 games.

The closest he’d come to 100 again was in 1998-99, when he recorded 93. Unfortunately, concussions and other injuries derailed his career and he was forced to retire at age 34. As Flyers’ captain, however, he revitalized the franchise and is still credited with ushering in a new era of “total package” players. He was inducted into the Hockey Hall of Fame in 2016.

Giroux Reaches 100 Under the Wire

The most recent player to reach the plateau and first to do it for the Flyers in more than two decades is captain Claude Giroux, who accomplished the feat in dramatic fashion two seasons ago.

The one that vaulted him to 100 came in the mid-second period on a soft power-play goal, in which Giroux threw the puck on net and through Henrik Lundqvist. He went on to notch two more goals in the game.

The 102-point campaign came after Giroux recorded just 58 the season prior — his lowest total since his 2012-13 season — as he said he was hampered by surgeries he had to repair hip and abdominal injuries in 2016. (from ‘Flyers’ Claude Giroux, healthier and wiser, back among NHL elite,’ Philadelphia Inquirer, 01/26/2018)

A former centreman, Giroux moved to wing prior to his resurgent season, allowing Sean Couturier to move to the top line. Couturier was certainly instrumental to Giroux’s success: he was involved in 40 of the captain’s 102 scoring plays.

“Giroux and Couturier look like the Sedin Brothers in their prime,” wrote former THW contributor Kurtis Wells in Feb. 2018. “The no look passes, shot passes, and overall trust in one another to know where they’re going to be has been fun to watch. Their vision aligns so well that they appear to be two steps ahead of the opposing team defenders. They create havoc and put the other team’s players out of position which either opens one of them up or opens the lane for a pass to a teammate resulting in a scoring chance.”

These players had tremendous impacts on the franchise in their own rights but never had 100 point seasons.

Reggie Leach, a member of the LCB line and a Manitoban like Clarke, recorded 91 points in 1975-76.

Rick Tocchet, a right-winger who played the first eight seasons of his career with the Flyers after being drafted in 1983 and his last three prior to his retirement in 2002, recorded 96 points in 1989-90. He’s been the Arizona Coyotes’ head coach since 2017.