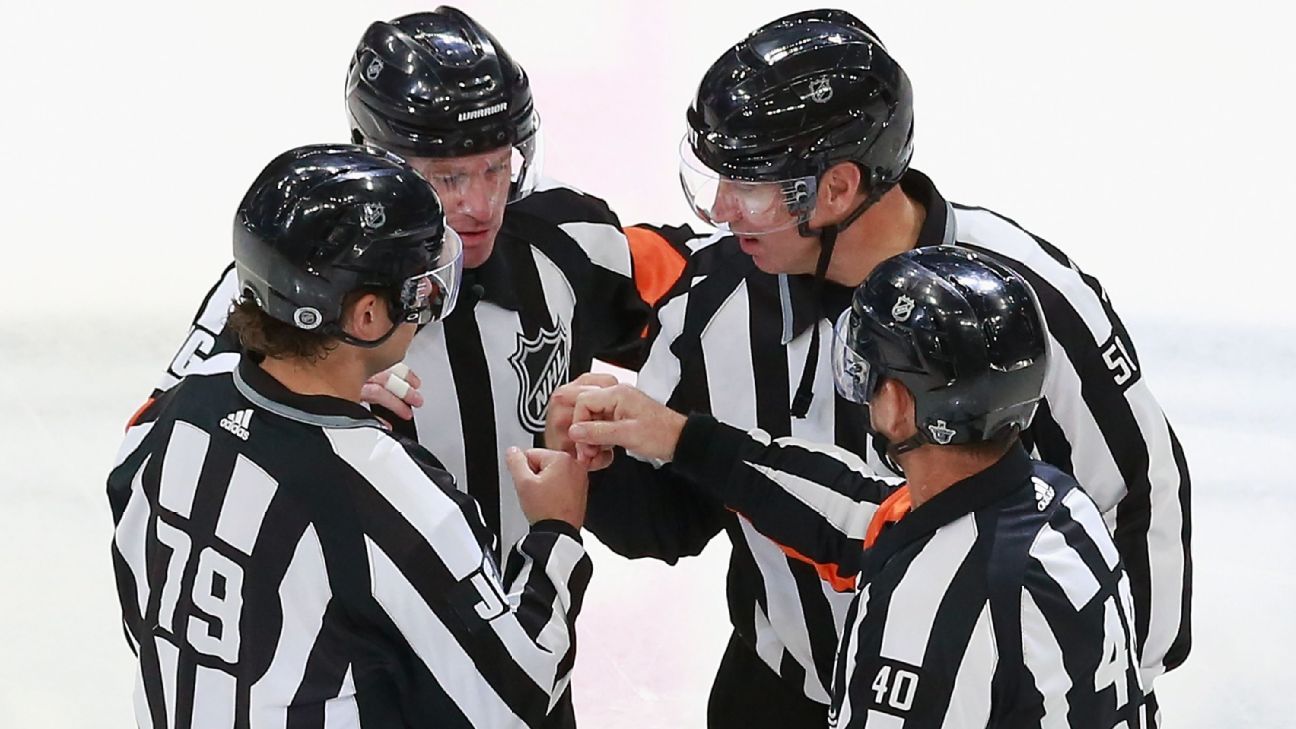 My favorite exhibit at the Liberty Science Center in New Jersey is a contraption that makes giant bubbles. There’s a rod attached to a pulley that’s dipped into soapy water. Yank the rope, the rod goes up and it makes a bubble the size of a car windshield. It’s pretty cool.

The best part is looking through that bubble at the person standing across from you as the soapy curtain ripples in the air. The bubble changes what you normally see and perceive. The last month of Stanley Cup playoff officiating in two different bubbles is evidence of that.

Every postseason is going to have its officiating controversies, because the spotlight is never more intense: These calls can mean the difference between advancement and elimination in a seven-game series.

The bubble warped the penalty numbers early in the postseason. Back at the start of the round-robin and the qualification round, teams were averaging more than 12 minutes in penalties, which was higher than the average for the first round of the previous three postseasons. “It’s embarrassing,” one NHL player in the tournament told me during the qualification round. “It’s playoff hockey. Let the [players] determine the outcomes unless it’s something absolutely blatant, you know?”

There were a lot of theories about this, but the one that had the most consensus was that players were a step behind after their monthslong layoff and were using their sticks more than their skating to make plays.

Now? It has swung back the other way, courtesy of research from Vince Masi of ESPN Stats & Information. Through Monday’s semifinal games:

We’re ahead of last season’s anomaly, but nowhere near the averages from 2015 to 2018. We went from a parade to the penalty box earlier in the postseason to a rate that’s behind those averages. Because the bubble warps everything.

The best example of the bubble effect is “home-ice advantage” — or lack thereof.

Every game in the bubble has a home team and a road team. The designations decide who wears what jersey, which bench they use and who has the nicer locker room. Without fans in the stands, there really isn’t a traditional home-ice advantage. Favorites have talked about how the dynamics of a Game 5, for example, are completely different without a home crowd’s emotional lift.

The lack of fans has also impacted the officiating, in a pretty incredible way. Through Monday’s semifinal games, for the home teams vs. previous seasons:

Again, toss out last season’s anomaly and you have average home team penalty minutes right in line with previous seasons. But when it comes to road teams, check out what the bubble has done:

Stay up to date with scores, schedule, team updates and much more.

It’s an established fact that many referees have shown a bias for home teams. Even last season’s wacky penalty numbers were skewed against the road team, as they were going back to 2015. But in the bubbles, that “bias” has been reduced to just three seconds on average between the teams, which is extraordinary … and completely frustrating.

This underscores the single-worst thing about NHL officiating in the regular season or the postseason, which is “game management.” The notion that the narrative flow of the game is what dictates rules being enforced rather than, you know, a violation of those rules. This has always been the prime source of inconsistent officiating in the NHL, and something that’s really apparent in the postseason.

From the start of the 2018 playoffs through Aug. 13, there were 1,778 minor penalties called in regulation in 223 games, and they break down thusly:

Some of that dip in the third period could be specific to game situations, but otherwise it defies rationality that there’s a 106-penalty increase from the first period to the second period and a 174-penalty decrease from the second to the third. That’s not a trend, that’s a choice. It’s beyond cliché for hockey fans to expect it, even when it leads to absolutely laughable situations like having two penalties called in five overtimes.

I can’t excuse those biases for referees. They remain imperative impediments to my enjoying the totality of this product on an annual basis.

I can, however, excuse some of the warped officiating we’ve seen in the bubble. Like the players, the officials have been thrust into a hermetically sealed environment, tested every day, away from family and friends, for weeks on end. It’s to their credit that their work — while it has been inconsistent and at times confounding — hasn’t been uniformly terrible. Like everyone else, they’re doing the best they can under unprecedented circumstances. Like everyone else, you hope they emerge from the bubble with a fresh perspective.

Like, for example, maybe try not calling so many penalties on the road team anymore when the fans eventually come back? Just some friendly advice based on the available evidence. Not trying to bust their bubbles or anything.

The three players you meet on Zoom news conferences

As you know, media availability during the Stanley Cup playoffs has been conducted over Zoom. During the past few weeks, we’ve been able to identify a few distinct personality traits that have emerged from these player interviews. Here are three of them:

1. The Deferrer and/or The Agree-er. Most Zoom video conferences involve two players seated next to each other. The Deferrer is the player who is constantly trying to get his teammate involved in answers. Sometimes because they’re shy. Sometimes because there’s a disparity in how many questions he’s getting vs. the guy sitting next to him; like when Nathan MacKinnon said “can you ask Mikko [Rantanen] a question?” when he was getting all the post-Game 6 attention. Usually, that teammate will then become “The Agree-er,” adding nothing to the discourse outside of, say, “Yeah, I think Nate said it all.”

2. The Decoy. NHL teams are supposed to offer a variety of players for interviews during the postseason, sometimes depending on the requests they get from media to speak with them. The Decoy is the player that’s either soft-spoken or there for a narrow purpose, like because the Slovakian reporter had a question. The Decoy is paired with The Lightning Rod, who is the player everyone wants to talk to because of their star power or their charisma or the fact that they recently made big news. The Lightning Rod does the talking, The Decoy fulfills his obligation to do media, and everyone wins.

both him and freddie trying so hard not to laugh, my heart 💙🥺 pic.twitter.com/1EwUASpnZ6

Listen To ESPN On Ice

Emily Kaplan and I chatted with NHL chief content officer Steve Mayer about building the bubbles, the return of “Quest For The Cup” on ESPN+ and the future of the Winter Classic. Plus, a look at each semifinal series, a discussion about the 2020-21 season and much more as Emily begins her encampment outside the Edmonton bubble. Listen, subscribe and review here!

Winners and losers of the week

I’ve lobbied for years to get this former player agent-turned-successful executive a shot at running his own team. After several years of learning under Columbus Blue Jackets boss Jarmo Kekalainen — and after interviewing for nearly every opening in the league at some point in the past few years — Zito will get his chance with the Florida Panthers. With Zito on board, the Blue Jackets have been a competitive franchise without being a capped-out one. The Panthers were in desperate need of an outside audit after the past decade of Dale Tallon. Zito will give them an honest one.

Zito is in Florida. Paul Fenton was (briefly) in Minnesota. The former Los Angeles Kings executive is now the last “assistant general who interviews for every opening and never gets the job” standing. Maybe after Florida passed, he at least caught the bouquet for the Arizona job.

“Are we going to do this dance every morning? My feet are sore,” was how Vegas coach Peter DeBoer handled a recent question about which goalie was going to play for him in an upcoming game. Look, it’s cute, these little chess games that coaches play. But if the NHL is as interested as the league claims it is about making inroads into sports wagering, then the dancing needs to stop when it comes to the single most important position on the ice and — outside of quarterbacks and starting pitchers — on betting.

Price is 33 years old. He has played a lot of hockey, including getting 82% of the starts for Montreal this season. His backups went 4-6-3 with a .889 save percentage. So Montreal’s trade for Jake Allen — even if it’s just for next season — has to be welcome news for a goalie that could use a breather once in a while.

The unrestricted free-agent-goalie market is remarkably deep this offseason. Holtby is a significant name on that market, but he has had to watch Jacob Markstrom of Vancouver and Robin Lehner of Vegas increase their suitors with every save. Not to mention the wonders Corey Crawford performed for Chicago in the first two rounds. Heck, factor in the apparent availability of Frederik Andersen and Matt Murray via trade, and that’s a lot of crease competition for Holtby, who is coming off the weakest regular season and postseason of his career.

Emily Kaplan and Greg Wyshynski take you around the NHL with the latest news, big questions and special guests every episode. Listen here »

Vancouver defenseman Quinn Hughes revealed one of the secrets behind goalie Thatcher Demko‘s effective play: “He goes to bed early. He eats the right way.” So the next time your lame friend goes to bed at 8 p.m. after eating broccoli and steamed rice instead of hitting Taco Bell with you at 2 a.m., just know that this person could in theory win Game 5 of the Western Conference semifinals.

Boston Bruins coach Bruce Cassidy said that David Pastrnak and Ondrej Kase messed up their conditioning for the restarted season after breaking quarantine to hang out in the North End of Boston around Phase 3 — a move that interrupted their ability to join the team for training. “Obviously missing time, him and Kase, their conditioning level wasn’t where it needed to be to stand the rigors of that. And that was a bit of circumstance. Typically you have the whole year to build that up if you miss a bit at the start. We didn’t have that luxury this year,” Cassidy said.

As Emily Kaplan reported, Liz Knox stepped down from the Professional Women’s Hockey Players Association board to “set the standard for inclusion” and have Canadian national team forward Sarah Nurse replace her. Said Knox: “We had this goal when we first started out to represent all of our players, national team, non-national team. … We never thought we had a group that wasn’t represented here. Part of that is our own ignorance and our own privilege. I’m glad we didn’t wait too much longer to recognize that.”

Knox pointed out this was “a blind spot we’ve had in women’s hockey.” As much good work as the Hockey Diversity Alliance has done, it has one of its own, as Nurse pointed out. “I’m very supportive of what the HDA is doing, because ultimately I have the same vision and goals. But I have been disappointed that there hasn’t been female representation, not only on the board, but really in any of it,” said Nurse, who had some initial conversations with the HDA.

In case you missed this from your friends at ESPN

Really proud of the piece Emily and I collaborated on regarding what the 2020-21 season might look like on the ice and in the stands. Check it out.