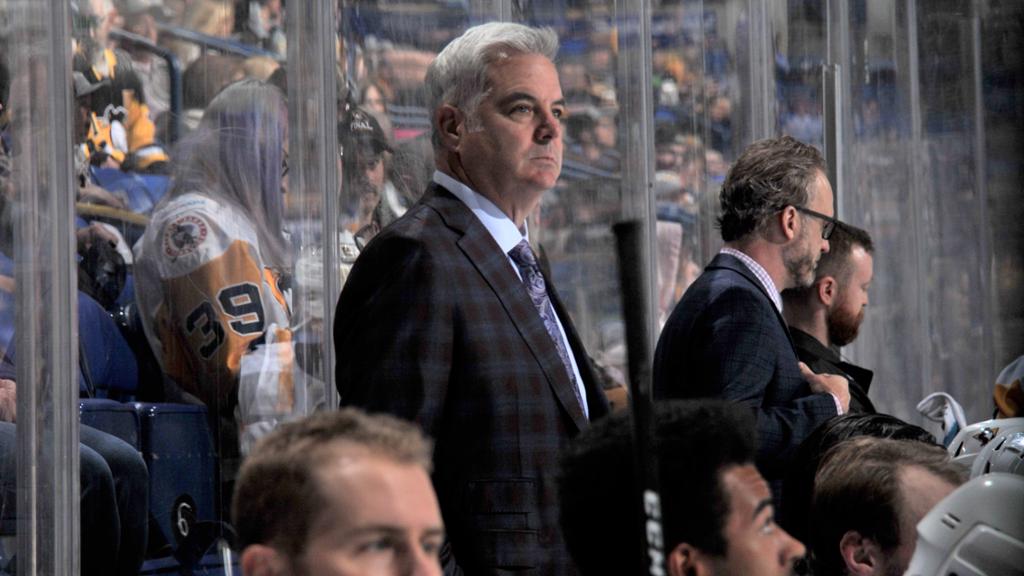 Mike Vellucci has won championships at both the OHL and AHL level. He led the Plymouth Whalers to a league title in 2007, and guided the Charlotte Checkers to the Calder Cup in 2019 – earning the Louis A.R. Pieri Memorial Award for AHL Coach of the Year.

And when Vellucci joined the Penguins organization last summer as general manager and head coach of Wilkes-Barre/Scranton, he expected to do more of the same for the foreseeable future – develop the players there while also trying to lead them to a Calder Cup.

So while Vellucci wasn’t necessarily expecting to be in the NHL so soon, it turns out the timing was right in every aspect for him to join head coach Mike Sullivan’s staff as an assistant coach with Pittsburgh. And now, the goal is now trying to help them to a Stanley Cup instead.

“I know for my family and myself, we’re really excited,” Vellucci said of taking his first coaching job at the NHL level. “It means a lot. It really does. My mom and dad are 80 years old, so it was pretty exciting to tell them and the rest of the family.”

He enjoyed having that long-term stability while raising a family, which isn’t easy to find as a coach, particularly in the NHL. But now that his children are grown up, Vellucci felt more ready to make that transition to the NHL than ever before.

“It’s something I’ve always wanted to do, but I was never in a rush to do it,” Vellucci said. “I think that’s just an everyday life thing. Everybody thinks it’s a sprint, but to me, it’s more of a marathon. You have to do it when the timing is right and the people are right, and it just feels like the right situation and the right time for me and my family.”

Vellucci, 54, is looking forward to the chance to work with Sullivan and Todd Reirden – who is re-joining the organization for his second stint as an assistant following six seasons on the Washington Capitals coaching staff.

“I’m really excited just to be a good teammate with the coaching staff,” Vellucci said. “Give my opinion when it’s asked for, and work with Sully and Todd and learn from them. They have both been NHL head coaches, so it’s a very exciting time for myself to make this move. I have had chances to move up other times, but this is just the best opportunity as far as learning and getting involved with the best organization.”

Vellucci’s familiarity with the Penguins organization – both with their style of play and younger personnel – is a big reason why Sullivan and Jim Rutherford felt he would be a good fit on Pittsburgh’s coaching staff.

Over the past year, Vellucci helped WBS to a 29-26-3-5 record in 63 games this year despite having a revolving door when it came to call-ups due to injuries in Pittsburgh. In total, eight of Vellucci’s players at the AHL level saw action with Pittsburgh last season.

“I think Mike has intimate knowledge of these guys,” Sullivan said. “Where they’re at, what their strengths are, where their weaknesses may lie and how we can help them along the way. I think he has a real solid understanding of which guys are close to making the jump to the National League level. He knows their personalities, and so all of that information I think is going to be really, really helpful for us.”

Vellucci is certainly used to working with younger players, and there are a few he thinks could push for spots next year. He said the growth that 21-year-old defenseman Pierre-Olivier Joseph made last year was ‘outstanding,’ and that there were a few others who made strides this season.

But in his new role, Vellucci will be working with Pittsburgh’s star players as well. He will oversee the penalty kill in addition to working with the team’s forwards, and the chance to build relationships with the likes of Sidney Crosby and Evgeni Malkin is thrilling to him.

“It’s awesome,” Vellucci said. “I mean, they’re the best players in the world, and that’s what you strive for – to do and be the best in your profession, and those guys are that. I want to bring energy and enthusiasm. I’m not going to take it for granted that I’m in the NHL. I want to be the best forward coach and penalty kill coach in the league and work towards that.

“I’m very excited to work with those guys and try to get my points across on how I want to play the penalty kill and other things across to them. And I’m just excited to have the opportunity to coach some of the best players in the world.”