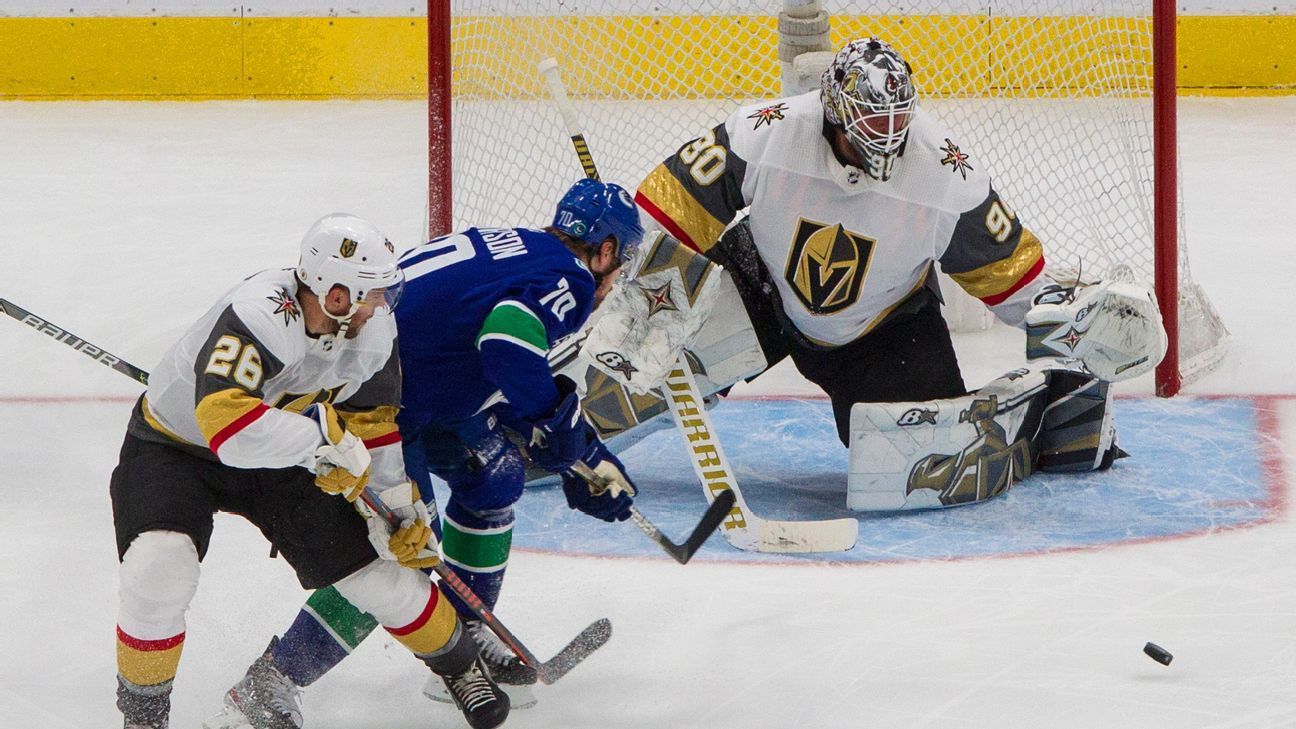 The Vegas Golden Knights‘ 3-1 series lead over the Vancouver Canucks has evaporated. Their offense has been silenced by a hot goaltender. After losing 4-0 in Game 6 of their Western Conference semifinal series Thursday night, their postseason fate will be on the line.

The story of the night — and, increasingly, the series — was Vancouver goalie Thatcher Demko, who entered the series in Game 5 after starting goalie Jacob Markstrom was deemed unfit to play. Demko has given up one goal on 91 shots for a .989 save percentage in the only two postseason starts of his career, rallying the Canucks to a Game 7 at 9 p.m. ET on Friday night in Edmonton.

“There’s no quit. I think we’ve shown that all year. Demmer’s playing unreal and giving us a chance to win,” said forward J.T. Miller. “We’re coming up big at the right time, right now. It says a lot about our group. We could have easily rolled over. It’s not the same as when you have a normal fan base in the game. It’s pretty quiet in the rink. It’s easy to want to quit and go home. But we’re here for one reason. We don’t really care what anyone else thinks. I think we’re going to be ready to play tomorrow.”

The Golden Knights have had the shot and puck possession advantages in their consecutive losses. Their power play has gone 0-for-7.

“We gotta score some goals,” Golden Knights winger Mark Stone said with an exasperated chuckle. “I mean, how many did we score? None today. We’ve gotta find some ways to put the pucks in the net. We got lots of looks. We gotta get some bodies in front of the net.”

For Stone and the majority of his teammates, this series marks the second straight postseason in which the Golden Knights have blown a 3-1 series lead. They lost Games 5 and 6 to San Jose in the conference quarterfinals last season and then blew a 3-0 lead in the third period of Game 7 to lose the series.

The coach of that Sharks team? DeBoer, who was hired to replace Gerard Gallant in January.

“This is a different group. Different team,” DeBoer said. “We’ve hit a group over there that’s feeling confident and getting great goaltending, and that’s going to happen on the playoff trail. You have to find a way. This is our adversity. We have to stick together and come through it.”

Game 7 presents the Vegas coach with a challenging decision. He has said throughout the playoffs that he has a plan for goaltenders Robin Lehner, who started Game 6, and former starter Marc-Andre Fleury, who has played in the team’s other back-to-back games in the postseason.

“Whoever plays, plays. If I get to play tomorrow I’ll do my best, like I always do,” said Lehner, when asked if he expects to play in Game 7. “I feel pretty good out there. The bounces aren’t going our way right now. They get two posts and in, we get two posts and out. There was a couple of open nets that just bounced on us in the first period. Small margins. If you play, you just gotta do your best.”

“We don’t have time to think about anything,” he said. “It’s a back to back. It’s a unique scenario, one that we’ve never been in. It’s nice that we have this opportunity tomorrow. You don’t want to have to sit in your room in the bubble and think about what went wrong to get to this point. This is what you dream about. We should be excited for the challenge.”

Rangers’ Lindgren Is the Perfect Defense Partner for Fox
2021 NHL Draft: 5 Underrated WHL Prospects
2021 NHL Draft: Live Tracker
‘We support you.’ Hockey community reacts to Luke Prokop coming out as gay
Been there, done that: Vegas Golden Knights have advice for Seattle Kraken