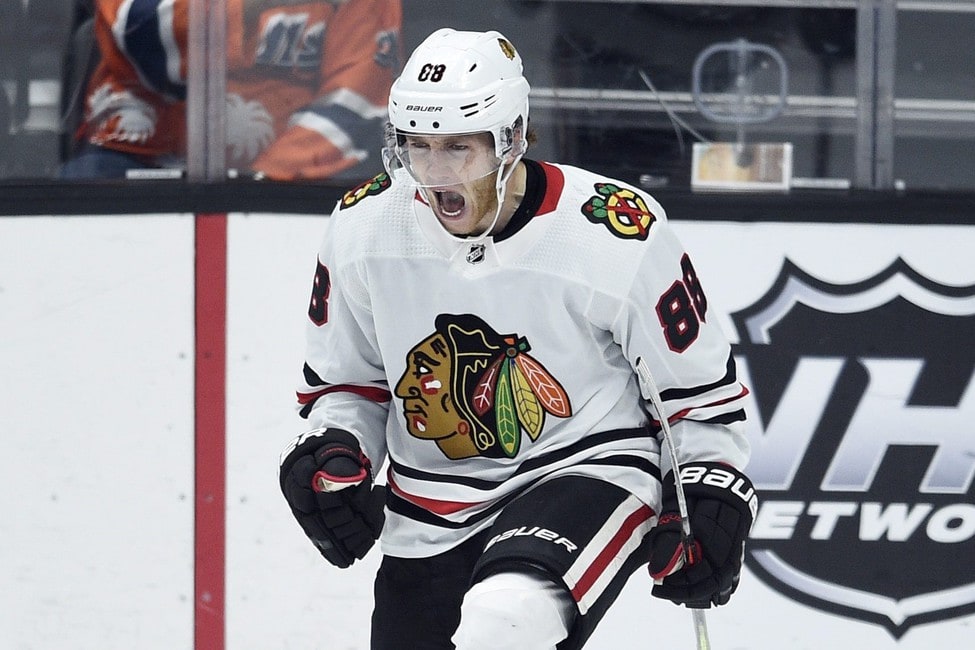 The Chicago Blackhawks ended the month of February with a bang, defeating their rival, the Detroit Red Wings, in a blowout win 7-2. However, the first game of their two-game set did not go as planned, with the Blackhawks falling short to the Red Wings by a score of 5-3.

This was an unusual series for the Blackhawks in losing their first game to the Red Wings in this series, as they previously won four straight against them. To go along with that, the Red Wings currently sit near the bottom of the Discover Central Division in 7th and have been struggling to get going this season.

Despite losing the first game to the Red Wings, the Blackhawks can walk away from this series knowing that it is essential to bring their ‘A game’ regardless of the opponent they are playing because, at the end of the day, this is the NHL.

Now let’s take a closer look at the four takeaways for the Blackhawks before they take on their challenging March schedule, starting with the Tampa Bay Lightning on March 4.

Blackhawks’ star Patrick Kane reached a huge milestone in this series, scoring the 400th goal of his NHL career. He is only the fourth Blackhawk to reach that mark and becomes the 100th NHL player to do so.

Kane’s 400th goal came in the Blackhawks 7-2 win against the Red Wings on Sunday with teammate Alex DeBrincat setting him up.

“It’s exciting to achieve them and nice to have these types of milestones. It probably means I’ve played a while, but I just think you want to keep getting better,” Kane said in a press conference after scoring his 400th goal.

Former Blackhawks’ star Steve Larmer, who currently sits ahead of Kane with 406 goals, sent out a video to Kane congratulating him on his huge milestone.

However, it doesn’t stop here for Kane, as he is only six goals behind Larmer for the third most goals scored by a Blackhawks player.

Overall, Kane had a decent performance this series against the Red Wings, finishing with one goal, two assists, and three points through the two games they played.

DeBrincat Doing a Little Bit of Everything

Alex DeBrincat had an outstanding series against the Red Wings, scoring a total of two goals and three assists for a total of five points.

It’s also worth noting that DeBrincat was dominant in the second game of the back-to-back, scoring a goal and recording three assists in that game alone.

DeBrincat is having his best goal-scoring season yet, as he is only seven goals away from tying his last season’s total of 18 goals, and it should be noted that DeBrincat played 70 games to reach that total.

To go along with that, DeBrincat is one of the best offensive players on the Blackhawks, as he is currently tied with Kane with 11 goals and sits in second in assists and points with 14 and 25, respectively.

The Blackhawks’ rookies had their fingerprints all over this series, as Brandon Hagel, Ian Mitchell, Pius Suter, and Kevin Lankinen all played extremely well for their team.

Starting with Hagel, he was steadily productive this series, recording one assist in each game played, adding to his total of five assists to the season. This was also Hagel`s first assist since Feb. 15, and it was good to see Hagel getting back on track after not recording an assist in his previous four games.

Blackhawks’ rookie defensemen Ian Mitchell also recorded an assist in the series, which was just his second for his career and his first assist since Jan. 22, which also came against the Red Wings.

Pius Suter moved back up to the number one spot among rookies for most goals scored this season with seven, finishing with a goal in this series after not scoring in his previous seven games.

Calder Trophy-candidate Kevin Lankinen was on point in the one game that he started, making a career-high 44 saves on 46 shots, leading the Blackhawks to victory.

Taking a look at how Lankinen ranks among all rookie goalies, he is currently tied for first in wins with nine, save percentage at .924%, and leads all goalies with 477 saves.

Not only did the Blackhawks finish their series with the Red Wings with a win, but fans also got a first-hand look at the their reverse retro jerseys on ice for the first time this season.

The Blackhawks will wear their “reverse retro” jerseys two more times this season, once against the Nashville Predators on March 28 and for the final time against the Dallas Stars on April 8.

Although the Blackhawks have only played one game in their “reverse retro” jersey, perhaps it’ll bring some good luck to this team, as they are currently undefeated in these jerseys.

With that said, the Blackhawks have some time off before they began a tough March schedule, starting with their three-game series with the Lightning at home.