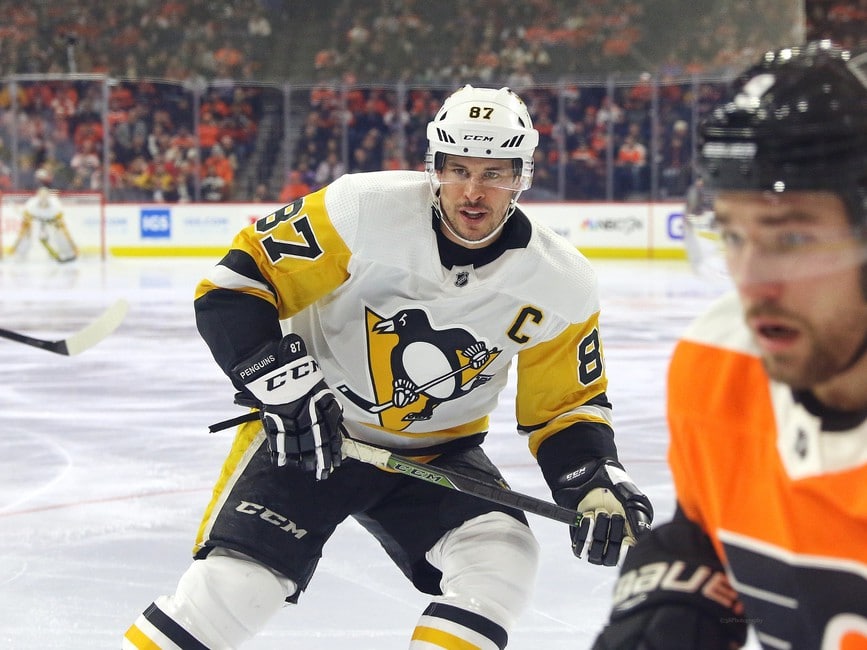 In today’s NHL rumors rundown, it appears Edmonton Oilers forward Alex Chiasson may be missing some time after a cross-check to close Monday’s game against the Toronto Maple Leafs. Meanwhile, Derek Stepan is done for the season according to the Ottawa Senators. The Tampa Bay Lightning are looking for a defenseman on the trade market and the Anaheim Ducks want to make a move but salaries for the players they’re shopping are problematic. Finally, Sidney Crosby has entered COVID protocol and both TSN and The Athletic have released their trade boards for the season.

Chiasson to Have NHL Hearing

Chiasson will have a hearing with the Department of Player Safety over a cross-check to Maple Leafs forward Jimmy Vesey. The hit being looked at came just as time expired in the third period during Monday night’s game and as a bit of bumping and tussling was going on between the two teams.

Following the game, Chiasson was handed a five-minute major and a 10-minute misconduct for the hit, which was not caught on the television feed. It’s unclear what the punishment will be, but Chiasson could miss Wednesday’s game, the third meeting in the series between the Leafs and Oilers.

Lightning to Add to Their Blue Line

As per a report by Joe Smith of The Athletic, expect the Lightning to add a blueliner before the NHL Trade Deadline passes. He writes:

They never replaced the two veteran right-shot defensemen they lost in the offseason (Zach Bogosian and Kevin Shattenkirk), both of whom played significant minutes during their playoff run.

Related: Oilers Fans Should Be Excited About Dylan Holloway

Stepan Done for the Season

The Senators have revealed that Stepan will be sidelined for the remainder of the NHL regular season. The team said in a statement, via Senators general manager Pierre Dorion, that Stepan requires a surgical procedure to repair a damaged labrum that he incurred in dislocating his left shoulder.

This may mean the end of Stepan’s run with the Senators as the player is a pending UFA and there was talk he might be traded before the injury to get him closer to his family.

Trade Boards Released By The Athletic and TSN

The NHL trade deadline is about six weeks away and there is a ton to talk about. Both The Athletic’s and TSN’s Trade Boards that were released Monday, and there are some similarities but also some major differences.

The Athletic’s list was composed of 28 players, many of whom were selected because the scribes spoke with GMs and executives and took into consideration everything from team need, to salary, to the financial landscape of the NHL and some of the revenue being lost by the respective franchises. TSN’s list, composed by Frank Seravalli, seems to be one that came a result of collected information gathered from inside sources, but only listed 15 players.

Interestingly, Jack Eichel was No. 2 on The Athletic’s list, while he wasn’t listed on TSN’s board at all. TSN had players like Tony DeAngelo where The Athletic did not and both lists had Mattias Ekholm of the Nashville Predators ranked in the top spot. The Vancouver Canucks, Detroit Red Wings, and Buffalo Sabres had multiple players on each list.

Crosby is the latest big name to enter the NHL’s protocol according to Pittsburgh Penguins head coach Mike Sullivan. The star center will not be available for tonight’s game. Important to note is that this does not mean he has the virus, only that he might have been in close contact with someone or a test came back inconclusive.

The team did not have a morning skate today because of the protocol but it sounds like tonight’s game against the Philadelphia Flyers is still a go.

According to Sarah Goldstein of The Athletic, a high-ranking NHL executive notes that there is interest in players like Adam Henrique, Jakob Silfverberg, Cam Fowler or even Ryan Getzlaf of the Ducks. That team is well represented on both trade boards released yesterday.

The issue for Anaheim is that to move some or all of these players means the Ducks will likely have to retain some salary. Henrique has three years left on his contract at over $5.8 million per season and any interested team might require the Ducks eat 50 percent of his contract. Silfverberg, Fowler and Getzlaf are being viewed similarly other teams, especially Getzlaf whose $82.5 million cap hit isn’t affordable for most clubs.