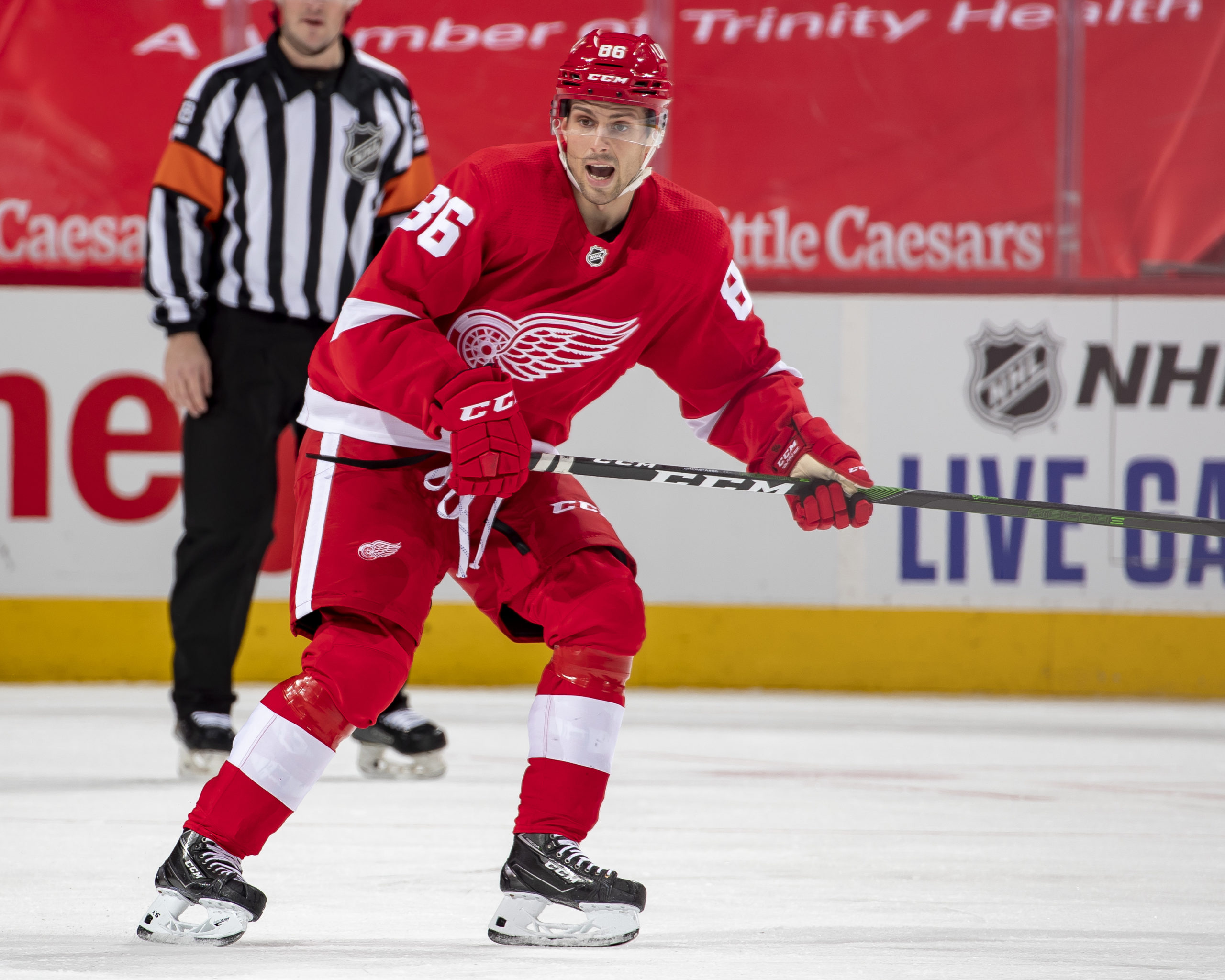 The Detroit Red Wings were one of several teams impacted by the realignment for the 2020-21 NHL season. Moving from the “old” Atlantic Division to the “new” Discover Central Division meant an opportunity to rehash old rivalries while getting more opportunities to play top teams like the Tampa Bay Lightning and Carolina Hurricanes. Through the first six weeks of the season, we’ve learned quite a bit about Detroit’s opponents and what makes them difficult to play against. That being said, let’s take a deeper dive into the Central and how the Wings have done against each team.

The Hurricanes are certainly a Stanley Cup contender when you look at most stats. They’re sixth in Corsi For percentage (CF%) at 53.3% and 10th in expected goals for (xGF). Carolina’s power play is converting at almost 30% (29.58%), which is the fourth-best figure in the league. Their goaltending has a team save percentage (SV%) of .933 at 5-on-5, which puts them sixth league-wide. There’s a lot to like about what Rod Brind’Amour’s team has done so far.

Carolina has only played Detroit twice this season and those were the first two games of the season for each team. While the Hurricanes won the first matchup with a convincing 3-0 shutout on opening night, the Red Wings took the second game 4-2 by scoring three goals in the third period. I’m sure that the Hurricanes would like to have that loss back, considering where the Red Wings are at this point of the same, but that’s just how it goes sometimes.

These teams meet again on March 4 in Raleigh and the player to look out for is Jake Bean. The Hurricanes’ defenseman is earning his spot in the lineup and even scored his first career NHL goal Saturday against the Florida Panthers. He’s one of many players who makes Carolina’s defense so tenacious and will make the life of any Red Wings forward miserable when these two go head to head.

I don’t want to say the Chicago Blackhawks are punching above their weight class, but they are one of the most surprising teams almost halfway through the season. Many of us, including myself, were expecting Chicago to be closer to Detroit in the standings before the season started, but are now in contention for the final playoff spot in the division. Kudos to the Blackhawks for the effort they’ve put in so far and we’ll see if they can turn it into a postseason appearance.

The Red Wings have struggled for most of the season against the Blackhawks, but they got their first win of the season against on Saturday. It was a quality performance from netminder Jonathan Bernier, who has an underrated season so far, as he’s stopped 57 of his last 61 shots against the team from the Windy City. However, things came back to earth for Detroit on Sunday as they were throttled by Chicago 7-2. Shout out to Patrick Kane for scoring his 400th career NHL goal in that game as the American has only got better with age.

While it would be easy for me to talk more about Kane and his performance, I need to give some love to Kevin Lankinen. He’s played tremendously for the Blackhawks this season, which has been much needed considering I had no idea who was going to be the starter for Chicago. If he can lead the team to the playoffs under these circumstances, with this weird season we’re having, he deserves Calder Trophy consideration. It’s tough to ignore a .924 SV% and 2.55 goals against average (GAA), especially considering the defense in front of him.

Columbus is tied with the second-most games played among Central Division teams (24) and they’re not quite what I have expected. Obviously, the surprising part about the Blue Jackets’ season has been the chaos surrounding them. Between the Pierre-Luc Dubois fiasco, Patrik Laine fighting in an actual game, or the conundrum between the Jackets and Hurricanes on Feb. 7, they’ve been one of the most entertaining teams all season. And I didn’t even mention John Tortorella!

The Blue Jackets have even made games against the Red Wings fun. In their first meeting of the season on Jan. 18, we saw Detroit captain Dylan Larkin scrap with star Columbus defenseman Zach Werenski near the end of that contest. What made that so awesome is that Larkin and Werenski are actually best friends (roommates at the University of Michigan as a matter of fact) and the Red Wings forward left tickets for his best friend’s family, who live nearby, to come and watch. Honestly, I know Detroit lost this game, but that might have been the highlight of the season.

These teams are scheduled to meet tonight at Nationwide Arena. While I’ll be watching Laine since he’s so talented, fans should also look out for Blue Jackets center Riley Nash. He’s becoming a constant figure in the bottom six for Columbus while also providing a positive off-ice environment. The Consort, Alberta-native probably won’t be a regular on the scoresheet against the Red Wings, but don’t be surprised to see him making a few plays here and there that push his team to victory.

I don’t know that any team has faced more adversity in this division than the Dallas Stars. They’ve battled COVID-19, injuries, and the postponement of several games. Sam Nestler, who writes about the Stars for The Hockey Writers, wrote a strong piece on the team through the quarter-season mark that takes a good look into their season so far and all the challenges they are having to overcome. Imagine having to play 43 games in 76 days!

Against the Red Wings, Dallas had two good showings, including a 7-3 win the second time they played. With no games scheduled between these two teams until March 18, a lot can happen between now and then. Whether it be trades, roster moves, or the Stars getting back some of their key players like Tyler Seguin and Ben Bishop, don’t sleep on the team from the Lonestar State being contenders.

A literal star on the Stars is Joe Pavelski, who has 20 points in 17 games. Have eight of those goals come on the power play? Yes, yes they have. So, while it’s easy to rip on him scoring so many goals on the man-advantage, it’s also on the opponent to take that consideration when they face-off. I will be slightly upset if he scores on the power play against the Red Wings because that’s something you should know (and stop) before you even get on the ice. I’m extremely excited to see what these two teams look like when they meet again.

Like the Blackhawks, the Panthers have been one of the most pleasantly surprising stories of the NHL season. Their offense has been electric all season, scoring more goals per game (3.20) than the Colorado Avalanche, Boston Bruins, and Vegas Golden Knights. That is thanks in part to both Jonathan Huberdeau and Aleksander Barkov scoring over points this season, including scoring a combined 11 goals at even strength. This puts Florida on pace to make a long playoff run for the first time in years.

The Panthers have played the Red Wings in twice as many games compared to the next closest teams, which would be three games against the Stars and the Tampa Bay Lightning. One of the bright spots against Florida when Givani Smith had a Gordie Howe hat trick in South Beach on Feb. 7. Detroit would win the game 4-1 and he now has four points in eight games this season. It’s another reason why I’d like to see the younger guys play more, especially when they get to play against a quality team like the Panthers.

We’ll see these squads battle in a back-to-back on March 30 and April 1. Who knows how well each team will perform in less than a month from now, but I’d have to believe the Panthers would be playoff contenders at that point. They have a points percentage over .700 and with how underwhelming some other teams (including the Red Wings) have performed, I would be stunned to see Florida on the outside looking in for a top-four spot in the Central Division.

Man, what is going on with the Nashville Predators? After falling to the Arizona Coyotes in the play-in round for last season’s playoffs, the Predators are below .500 and have had one of the worst early-season slumps. Although they’ve won four of their last six games (including a victory over the Red Wings), the pressure is on to get back into playoff contention.

The Predators host the Red Wings on March 23 and 25, and I’m interested to see if head coach John Hynes starts Juuse Saros in one of those games. He left Tuesday’s game against the Hurricanes after taking contact from Nino Niederreiter and is the team’s best goaltender at the moment. We’ll see if Nashville can turn their season around because they’ll need Saros and the rest of the crew to improve their game to have a shot at making the playoffs.

Stop me if you’ve heard this before but the Tampa Bay Lightning are Stanley Cup contenders. The biggest storyline for the team this season has to be the return of Steven Stamkos. The 30-year-old has been electric, scoring 20 points in 18 games for Tampa Bay. And in case you’re wondering, he’s still got that howitzer of a shot.

Although it’s only been two games this season, the Lighting have been lethal when facing the Red Wings. Tampa Bay is 2-0 against Detroit, including posting a plus-six goal differential. They will meet at Little Caesars Arena next Tuesday for the first time this season, a place the Lightning haven’t won in almost two years (a 5-4 win on March 14, 2019). Part of me is excited to see the juggernaut that is Stamkos and the defending Stanley Cup champions, but I’m also worried about how the Red Wings will perform in the series.

Someone to watch for in the next few weeks is Tampa Bay defenseman Mikhail Sergachev. He has 15 points in 20 games, including 14 assists, while logging over 21 minutes of average ice time per game. He would get even more attention if his defense partner wasn’t Victor Hedman, but it’s tough to ignore how well the 22-year-old has been playing. I can’t wait to watch him, as well as the rest of this talented group of players.

Nobody thought that this Red Wings team was going to be a playoff team. However, I thought this team would be substantially better than what we’ve seen from them as they look way too much like last season’s team. While there are opportunities to improve in the standings (facing Columbus and Nashville will help), there’s a good chance that this team will continue to play for a lottery pick and hope for a better season in the regular Atlantic Division in 2021-22.