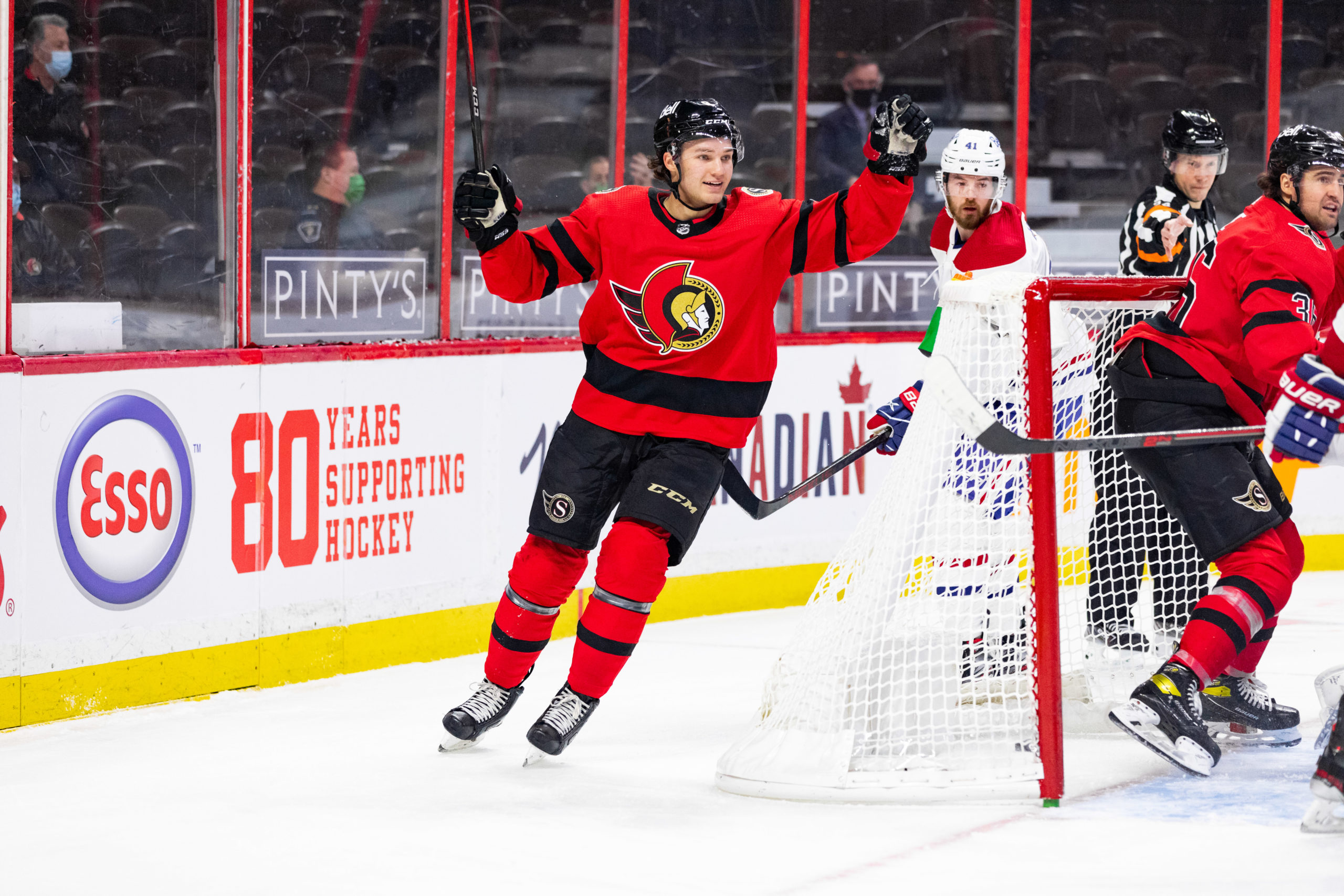 It’s hard to believe it but the Ottawa Senators are at the halfway point of their 2020-21 season.

This season has had its ups and downs, but it looks like Senators fans are getting the best of both worlds. The young stars are developing and improving, and the team is still far enough down the standings that a good position in the 2021 NHL Draft is likely.

If you divide the season into quarters, Q2 looks a lot different than Q1. After knocking off the Toronto Maple Leafs in their season opener, the Senators struggled for the next 13 games.

After the first 14 games of this 56-game season, they had the worst record in the NHL at 2-11-1 for five points. In the second quarter, their record was a respectable and almost playoff-worthy 7-7-0.

There are a number of reasons for the turnaround. Out of the gates, the Senators had little chance if any to be competitive. The roster had nine new faces, a lot of youth, and no exhibition games to prepare. Derek Stepan was a late arrival as his wife gave birth to their third child during training camp. Erik Brannstrom had to quarantine twice and had only one day of practice. Coaches had to get to know players, and players had to get to know each other.

Facelift On the Blue Line

Early in the season, the Senators’ lineup looked much different than it does at the halfway point. The team has already had a facelift on defence. While team ice time and scoring leader Thomas Chabot and veterans Nikita Zaitsev and Erik Gudbranson have been fixtures in the lineup, the team has opted to move some of their future players into the lineup.

Josh Brown is a big body who was brought in to help stabilize the blue line. He has only played in nine of the team’s 28 games, and most were early on. Brown, who has no points and has a minus-six rating, has not played since Feb. 11.

Braydon Coburn is another big-bodied veteran who was acquired before the season. He has played in 11 of the team’s 28 games, and like Brown, most of his action was early in the season. Coburn appeared in only two games in February and he has played twice in March. He has one assist and a minus-six rating.

An even bigger surprise has been the play of Artem Zub. The 25-year-old defenceman arrived in Ottawa after spending the past four seasons with St. Petersburg of the KHL in Russia. In 19 games he has six points and a plus-two rating. He has fit in well in a pairing with Mike Reilly, a puck-moving defenceman who had some struggles early in the season. In late February, Smith said in a media Zoom session that Zub and Reilly had been their most consistent pairing on defence.

Offensively, it is more of the same. Some short-term veterans have come and gone, and the young talent that began the season on the taxi squad has emerged.

Cedric Paquette was moved out after scoring one goal in nine games. Alex Galchenyuk, who scored 30 goals with the Montreal Canadiens just five season ago, played only eight games with the Sens and scored once before the team moved on from him. Stepan, who had only a goal and five assists in 20 games, is out for the season with a shoulder injury. His contract has a cap hit of $6.5 million, and he is an unrestricted free agent at the end of the season. He has likely played his last game in a Senators uniform.

Nick Paul has been one of the breakthrough players who have made an impact this year. He is playing on a line with Colin White and Evgenii Dadonov. White was a healthy scratch early in the season but has turned his game around. He has seven goals and six assists for 13 points in 24 games, and has already matched his goal-scoring total from all of last season.

Dadonov was stone cold to start the season, but went on a streak in February with five goals in five games. He has two so far this month to total eight goals and two assists for 10 points. More is needed from him, especially on the power play, but Q2 was much better than Q1 for Dadonov.

The strong play of the Senators’ young forwards have given the team a big Q2 boost.

Drake Batherson had one goal and five assists in the first 14 games of the season. In the second quarter of the season, he scored eight times and added another four assists for 12 points in 14 games. With 18 points, he is tied for second in team scoring with Brady Tkachuk behind Chabot.

Centre Josh Norris has been steady with five goals and 10 assists for 15 points. A key piece in the Erik Karlsson trade to San Jose, Norris has been in the Calder Trophy discussion since early in the season. With Stepan’s injury, his role on the team has increased.

Rookie Tim Stützle is looking more and more like a superstar every game. He is tied with Norris with 15 points, scoring six goals and assisting on nine. He has nine points in his last 14 games.

Even better than their solid play has been their effectiveness on the shootout. Led by their three young stars, the Senators are 2-0 in shootouts through the first half of the season.

While the offence and defence have both improved over the second quarter of the season, so has the goaltending. Matt Murray is still not as consistent as he needs to be for the Senators to be competitive. However, his second quarter was much better than the first, when he was last among starting goalies in both save percentage (SV%) and goals against average (GAA). He is 5-2 in his last seven starts. His GAA has improved to 3.66 on the season, and he now has a .885 SV%.

Heading into the second half of the season, the Senators are a much better team than they were early on. The most promising thing is that the players leading the improvement are predominantly 22 and under.

If they can stay competitive, win some games, improve, but lose just enough to stay near the bottom of the standings, things will become even more promising for the Senators heading into the 2021 NHL Draft.