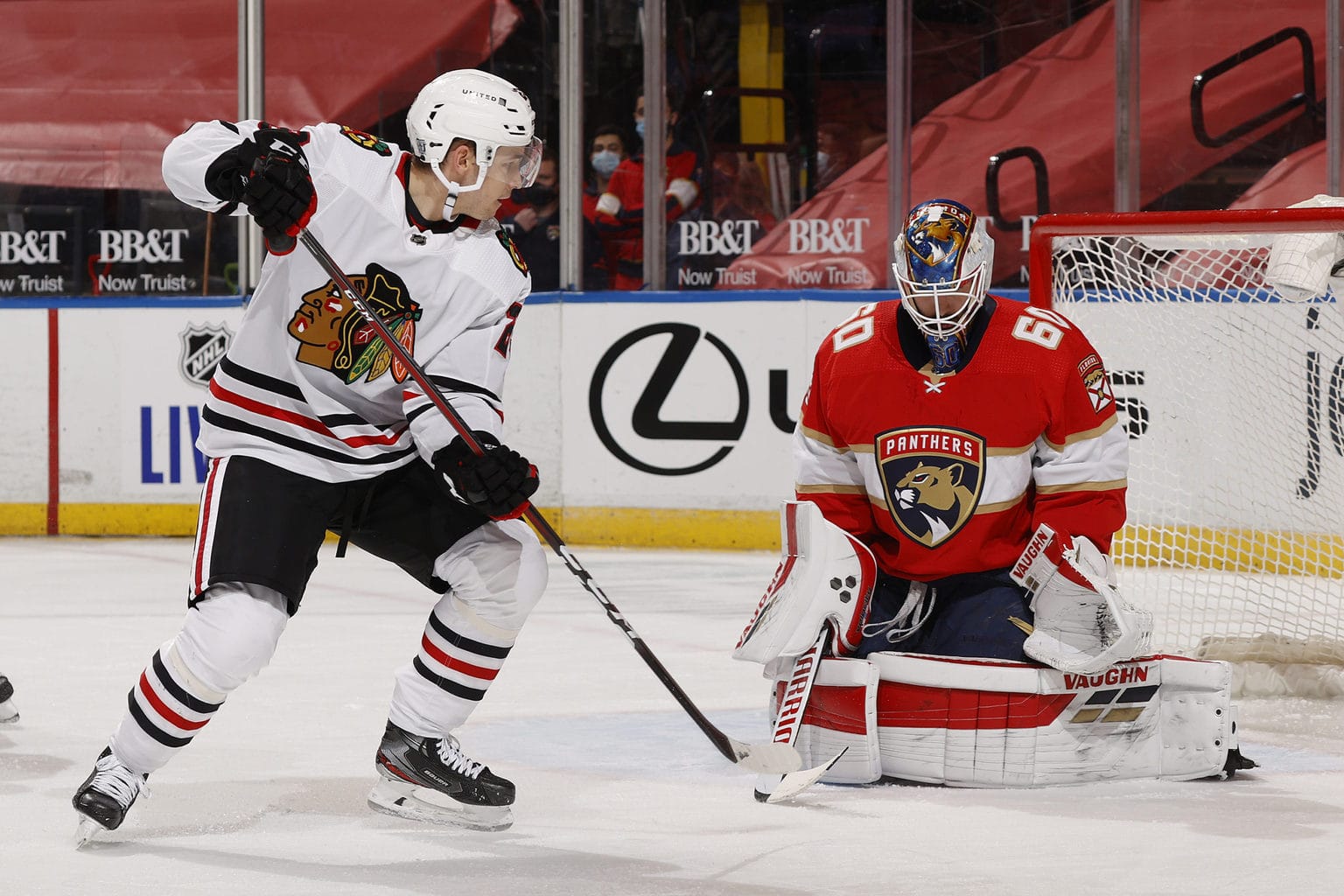 Looking at the stat lines of each contest, instead of the score, it would be fair to assume that the Florida Panthers had swept the Chicago Blackhawks in their recent two-game set. Yet, it was the Blackhawks that came out on top. Despite being outplayed in some areas of each match, they benefited from key performances that helped secure the four points.

Chicago was collectively outshot, 76-53. Florida had eight power-play opportunities, compared to the Blackhawks’ six. The Panthers threw 78 hits, while the Blackhawks only landed 56. The faceoff battles were close, but Florida had the edge at over 50 percent. All told, Chicago not only ended their 4-game skid, but they also started a streak the other way.

This season, Chicago was 0-3-1 against Florida heading into the third series between the teams, and a recent cold streak saw their playoff chances dwindle. While splitting wins this time would have been a step in the right direction, the Blackhawks did one better and added 2-0-0 to their record.

They’re now 16-13-5, with 37 points and hanging on to the last playoff spot in the Discover Central Division.

Having now played each other eight times through this re-structured schedule, Chicago is a far more respectable 2-3-1 heading into their last set. They will meet again, for the last time this year, in late April. Whether Chicago can turn that record into a winning one could be the difference between whether they find a way into the postseason or not.

Lankinen Back to Being Lights Out

There is no denying the incredible show that Kevin Lankinen put on to kickstart his career. He was achieving elite numbers, both among this year’s rookie class and as far as the entire league was concerned. He became the face of how this Blackhawks team was finding the surprising success that they were.

However, the numbers Lankinen was achieving were unsustainable, even for the most veteran and accomplished netminders in the game today. So, it made sense to anticipate a downfall to some degree. Unfortunately, it hit harder than expected. Heading into the week, Lankinen had only won one of his past six and was riding a save percentage of .877 in that span. Too far of a drop to elicit benefit to his Blackhawks.

Given what he’d shown the world he was capable of, no one should have been surprised to see Lankinen bounce back into form. Not only did he go 2-0-0 to help the Blackhawks sweep the Panthers, he also added a 41-save shutout performance to cap off the set.

“It was a fun one. A lot of saves, obviously. Maybe wasn’t our best game of the season, but we hang in there. Power play was good. Penalty kill was even better. Found a way to win against a good team. That was huge.”

Prior to the four points that Chicago just picked up against Florida, they had only earned one through their previous four meetings. Coincidentally, it was Lankinen who secured it from an overtime loss in his season debut. Personally, he is now 2-2-1 against a Panthers team that looked poised to sweep the Blackhawks before he got involved.

What most looked forward to in Pius Suter was his proven scoring ability. So, when he earned both his first goal and hat trick in his sixth game of the campaign, it felt like the flood gates were about to be blown wide open. He quickly climbed up the rookie leaderboard. He’s sat atop the goal-scoring list ever since, even though his production has since become more streaky than steady.

Ten goals and five assists through 34 games is an admirable pace to set through your first year in the NHL. But, having gone pointless through his previous six, Suter needed to find a way back onto the scoresheet. Not just for his own stat line, but because the Blackhawks obviously fare better when he is contributing.

Although Suter is averaging a couple of shots per game, he was only able to land three total in his past two contests. Luckily, that’s all that was necessary to help him make good on two attempts — one per game. Call it a coincidence, but just like his Blackhawks, Suter both snapped an ugly streak and began a far more attractive one in the past few days.

Chicago Can Finally Keep a Lead

Throughout their 4-game losing streak, which they’ve now snapped, Chicago was actually the team to score first in three of them — a microcosm of their game management so far this season, as holding leads has not been a strength of theirs by any means.

Clearly, if the Blackhawks hope to sustain any level of success throughout 2020-21, holding a lead will be just as pivotal as achieving it in the first place. If they continue to hand off crucial points, especially after taking ahold of them in the first place, how can they expect to deserve a playoff berth — let alone do any damage while there?

That message seemed to resonate a lot more clearly heading into this week. Not only did the Blackhawks score first in both games, but they actually found a way to maintain their earned advantage the whole way through. It wasn’t a result of Florida letting up, it was a more visible will to win that this team needs to make their norm moving forward.

Among Chicago’s surprising stats through the first half of their season was their power-play success. At one point, they lead the entire league with a conversion rate of over 30 percent. Unfortunately, they’ve also consistently been far less effective with a man in the box. They’re actually near the bottom of the league in that respect, maintaining a sub-75 percent penalty-kill percentage.

While a strong power play can compensate at the best of times, when it’s not producing at will then potential underlying issues become far more apparent. That’s exactly what the Blackhawks encountered throughout their recent losing streak. They capitalized only twice through 16 extra-man attempts (12.50 percent) while being scored on four of the 10 times they were shorthanded (60.00 percent).

Like the other areas of their game that decided it was finally time to re-appear, Chicago benefited from much better special-teams success these past two games. They went two for six on the power play (33.33 percent) and killed off seven of eight penalties (87.50 percent).

Finding a way to make these types of numbers more typical is a step in the right direction towards securing their spot in the playoffs. Only then will we get the chance to see just how much further this surprising success can take the 2020-21 Blackhawks.