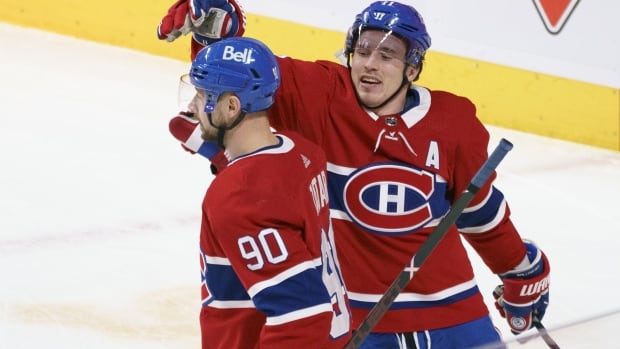 It was a triumphant return for Brendan Gallagher, Artturi Lehkonen and the rest of the Montreal Canadiens.

Gallagher and Lehkonen had a goal and an assist apiece as Montreal earned a dominant 4-0 home win over the Edmonton Oilers on Tuesday night. The Canadiens were playing for the first time since a 5-4 home shootout win over the Vancouver Canucks on March 20.

Two days later, Jesperi Kotkaniemi and Joel Armia both went on the NHL’s COVID-19 list and as a result the Canadiens had four games postponed — three with Edmonton and another versus Ottawa.

“I think we knew we were going to have energy,” said Montreal captain Shea Weber. “Obviously rest is key, especially in a season like this where it’s tough to get rest.

“We just harped on the little things like keeping it simple, especially early on trying to get back into it.”

Jesperi Kotkaniemi scores 18 seconds into the game for Montreal who goes on to blank Edmonton 4-0. 0:55

With its schedule having been revised, Montreal faces playing its remaining 24 games in 42 days. Kotkaniemi was removed from the COVID list Monday and scored Tuesday but Armia remains there.

Tomas Tatar had the other goal for Montreal (15-8-9). Goalie Carey Price stopped 16 shots for the shutout, his first of the season and 49th of his career.

“Breaks are hard to come by in a season like this,” Weber said. “Ask us in a month how we’re going to feel playing every second night and back-to-backs.

“It’s going to be a lot different story.”

Captain Connor McDavid had a goal disallowed for Edmonton (22-14-1), which was coming off a 3-2 overtime road win over the Toronto Maple Leafs on Monday night. McDavid had his 11-game point streak (seven goals, 16 assists) snapped but still leads the NHL in scoring with 63 points (21 goals, 42 assists).

However, the Edmonton captain had no official shots on goal Tuesday night. Linemate Leon Draisaitl, who stands second in NHL scoring with 54 points (19 goals, 35 assists) only had two as Oilers head coach Dave Tippett split up McDavid and Draisaitl in the second period.

“You can’t let them get going,” Dominique Ducharme, Montreal’s interim head coach, said of Edmonton’s top scorers. “With our forwards you need to gap up on them early and be on them quick so that they cannot get going.

“That was one thing that I thought as a team we did [well]. We had different lines playing against him [McDavid] and Draisaitl and overall we did a good job on that. Defensively in our zone, just keeping everything to the outside and taking time and space away.”

A fact not lost upon Weber.

“Our forwards did a great job of slowing them down,” he said. “Then the penalty kill did a good job as well.

“They’re guys that are dynamic and can make you pay very quickly and those are two things, I think, we did well.”

Veteran forward Michael Frolik made his season debut for Montreal. The 33-year-old winger signed a one-year contract as a free agent during the off-season and had been on the team’s taxi squad.

“He’s such a great guy in the locker-room,” Tatar said of Frolik. “He was always positive, which we love to see.

“He’s not in an easy spot but he proved he can be helpful for our team and we got him for a reason. I think he did a tremendous job.”

In episode 15, Rob Pizzo speaks to former Lightning goalie Mike McKenna about the goal celebration that had the whole hockey world talking. 6:57

Montreal was still minus Tyler Toffoli (lower-body injury), who has a team-high 18 goals. Eric Staal, acquired from Buffalo on Friday for 2021 third- and fifth-round picks, didn’t play as he must serve a mandatory quarantine first.

Kotkaniemi needed just 18 seconds to open the scoring with his fifth of the season. After Kotkaniemi converted Paul Byron’s centring pass, Montreal went on the power play following Edmonton’s challenge of the goal being unsuccessful.

After failing to convert on the power play, Montreal went ahead 2-0 on Lehkonen’s third of the year at 3:23. It took Edmonton five minutes 14 seconds to register its first shot on goal after the Canadiens had eight at that point.

Montreal came close to making it 3-0 when both Phillip Danault and Tatar both had solid scoring chances in front with just over six minutes to play. But Mikko Koskinen made the timely stop each time.

However Gallagher gave Montreal its three-goal advantage at 15:59, diving to tap in a rebound for his 13th goal as the Canadiens outshot Edmonton 15-7.

McDavid scored what would’ve been his 22nd goal at 13:55 of the second but it was called off by a successful Montreal offside challenge. The Canadiens countered with Tatar’s seventh of the season following a long setup pass from Danault at 17:54.

The Canadians don’t have long to relish their win. They visit the Ottawa Senators on Thursday before the two teams return to Montreal on Saturday night.