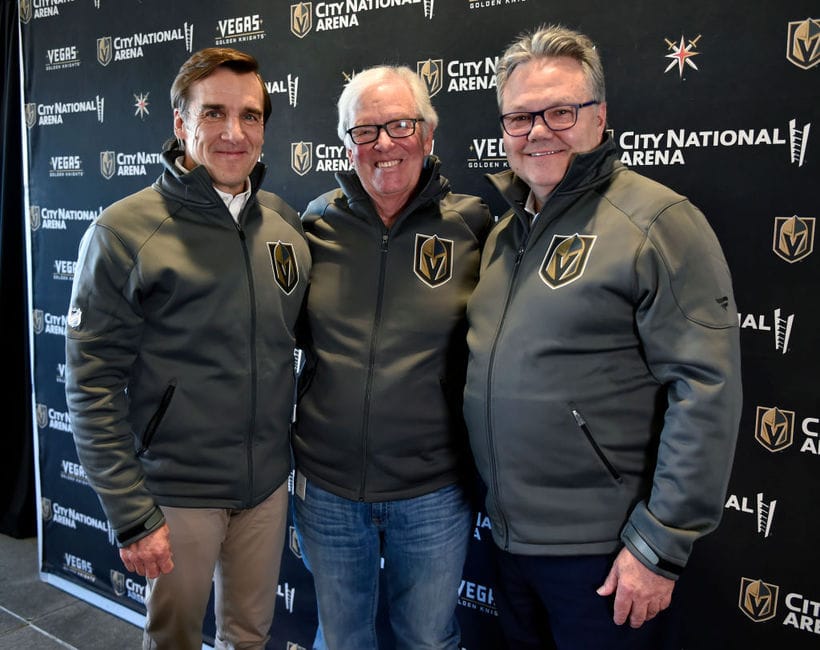 Any initial surprise over the May 2019 announcement of Kelly McCrimmon’s promotion to the general manager post with the Vegas Golden Knights quickly gave way to the realization that, regardless of who had what title, it would remain business as usual for the club. Throughout the Golden Knights’ history, the tandem of McCrimmon and George McPhee has remained an unchanged brain trust. It’s no surprise, then, that the GM switch has done little to disturb the franchise’s impeccable trade record.

Need proof? Look no further than the Honda West Division-leading squad’s statistical leaders. As of now, six of the Golden Knights’ top point-getters were acquired via trade. Yes, the expansion draft put the wheels in motion to enable the asset collection that helped the trades along. But let’s not forget that the Vegas executives successfully exploited a tool designed to really only give them a foot in the door by stocking the roster with largely unwanted depth cast-offs from other teams.

It will be interesting to see how effectively the Seattle Kraken and GM Ron Francis can duplicate the Vegas model during this summer’s expansion draft, as well as how much savvier rival GM’s have become in protecting their assets. Of course, that doesn’t change the fact that the Golden Knights’ wheeling and dealing has built a bona fide contender that is the envy of much of the league.

With an eye on the April 12 NHL trade deadline, let’s take a look back at how McPhee and McCrimmon constructed the top end of their Stanley Cup-contending roster through a series of shrewd, ambitious trades.

No one quite embodies the Golden Knights’ team identity in quite the same way as team captain Mark Stone, the club’s top scorer and chief two-way threat. While he may get some Hart Trophy attention as the best player on one of the league’s best teams, that he isn’t really in the same stratosphere as Connor McDavid (then again, who is?) shouldn’t take away from what he means to Vegas.

Stone has been everything the club wanted, and then some when they took advantage of his status as a pending unrestricted free agent and acquired him from an Ottawa Senators organization concerned they would lose him for nothing in the off-season. At the 2019 trade deadline, mere months before McPhee would transition to his president of hockey operations role, Vegas landed Stone and Tobias Lindberg in exchange for Erik Brannstrom, Oscar Lindberg (no relation), and a 2020 second-round pick.

Ottawa’s end of this trade will hinge on the development of Brannstrom, a 21-year-old Swedish defenseman who has yet to seize a full-time role in the NHL yet, although he did score his first career goals this season. Meanwhile, Oscar Lindberg is now in the KHL, while Egor Sokolov, drafted by the Senators with Vegas’ 2020 pick, is developing with the AHL’s Belleville Senators. At the moment, it doesn’t look like a remarkable haul for the 28-year-old Stone, who immediately signed an eight-year, $76 million extension to remain in Nevada long-term.

Long-time Montreal Canadiens captain Max Pacioretty appeared to be on the decline in 2017-18, dropping to 37 points from 67 in the previous season and registering a career-low minus-16 one year after being plus-15. Montreal seemed to think so, shipping him out that September for Nick Suzuki, Tomas Tatar, and a 2019 second-rounder.

The similarities of the trades to acquire linemates Stone and Pacioretty are striking. Both pending free agents (Pacioretty was heading into the last year of his deal), dealt about six months apart, were swapped for a player, prospect, and second-rounder package, while they instantly signed long-term to stay in Vegas. Presently, it appears as though Montreal did a bit better than their Scotia North Division foes, with Suzuki looking like a capable second-line center at just 21 years of age and Tatar scoring 47 goals over his first two seasons with the Habs (following pick swaps, the second-rounder became Mattias Norlinder and Jacob LaGuerrier).

It will be worth watching to see how this trade evolves over time, but for now, the Knights will gladly take the 32-goal, 66-point renaissance that they got from Pacioretty last season alongside Stone, especially since he’s producing at an even better pace this year.

It may not be fair to count an expansion draft-connected trade as part of a larger body of work, but you’d have a hard time making a more lopsided one than the deal that brought Shea Theodore over from the Pacific Division rival, Anaheim Ducks for ‘expansion draft considerations.’

Those considerations were really just a fancy way of saying that Anaheim didn’t want to lose Sami Vatanen or Josh Manson despite leaving them unprotected. So in exchange for not taking the two defensemen (Vegas drafted Clayton Stoner, who never played another NHL game), the Ducks gave the Golden Knights Theodore, a promising then-21-year-old blueliner.

That decision has not looked good in hindsight. Since the trade, Theodore has emerged as an elite rearguard, currently tied for 11th in league scoring among defensemen with the Colorado Avalanche’s Sam Girard. Meanwhile, Vatanen was shipped off to New Jersey that November, and Manson remains with the Ducks, albeit as a sturdy, stay-at-home back end stalwart. All told, the two men that Anaheim couldn’t afford to lose have scored a combined 141 points since the draft (only 68 of which have benefited the Ducks), while Vegas’ 25-year-old star has collected 138 points.

Few teams were put in as tough a position by the parameters of the expansion draft than the Minnesota Wild, who were forced to leave the likes of Matthew Dumba and Eric Staal unprotected. To keep them from being snatched up, the Wild surrendered promising Boston College winger Alex Tuch in exchange for a conditional third-rounder (2018 pick Connor Dewar) and the promise to take Erik Haula.

After Haula scored 29 goals in his first season in Vegas and Tuch piled up 35 goals and 89 points before his 23rd birthday, you could certainly see how costly the draft was for Minnesota. But the club was going to take some licks regardless. Staal would score 42 goals that season, while Dumba has consistently logged over 20 minutes per game as the Wild’s most consistent presence on their back end.

While the Golden Knights would’ve surely contented themselves with Dumba or Staal, they didn’t exactly come away disappointed. Haula has since left the fold – although perhaps a return looms? – but Tuch continues to impress. A 20-goal 2018-19 season paved the way for his eight goals and 12 points in 20 games in the Edmonton bubble last summer, which has since paved the way for the 24-year-old’s 13 goals in just 32 games thus far this season.

It was the Washington Capitals who finally put an end to the Golden Knights’ incredible expansion season in the 2018 Stanley Cup Finals, doing so while winning their first Stanley Cup in franchise history. So maybe they were just offering a token of thanks when, the following season, they traded bottom-six center Chandler Stephenson to Vegas for a 2021 fifth-round pick.

After parts of five seasons spent as a middling insurance option down the middle for the Capitals, Stephenson turned a corner soon after arriving in Vegas. He scored eight goals across 41 games after the trade and already has seven in 31 games this season. All told, the 26-year-old has amassed nine more points (42 to 33) as a Knight than he did in D.C., despite having played less than half as many games with his new team. From struggling for minutes on the fourth line in Washington, Stephenson suddenly finds himself centering Stone and Pacioretty as a top-line pivot.

As is so often the case with sturdy, defensive-minded blueliners, Alec Martinez is an under-appreciated component of the main Vegas core. One of just six players to suit up for each of the team’s 33 games, the 33-year-old has actually spent 70 more minutes on the ice than any other Golden Knight not named Marc-Andre Fleury. In that time, he’s posted a plus-15 that’s good for second on the team and has smoothly filled in some of the gaps created by the absence of Alex Pietrangelo.

And perhaps that under-appreciation extends to his old team, the Los Angeles Kings. After 10 and a half seasons and two dramatic playoff overtime series clinchers, the Kings moved him along to Vegas for a pair of second-round picks. One of those picks was flipped for former lottery prospect Lias Andersson (currently in the minors), and the other one will be made in this year’s draft. For that price, Martinez has been a stabilizing, veteran force, offsetting the loss of Pietrangelo while also preventing young rearguards Zach Whitecloud and Nic Hague from being exposed in greater minutes.

It’s worth noting that Martinez will be a free agent at season’s end, one that the Golden Knights will very likely struggle to afford. Sure, he’s 33 and on the downside of his career, but he would leave some awfully big skates to fill if he departs.

Looking ahead, this list may leave some fans anxious to see who McPhee and McCrimmon swindle next ahead of the trade deadline. Unfortunately, its widely expected to be a quiet deadline in Vegas for a team without many evident weaknesses (from “What I’m hearing about the Vegas Golden Knights before the trade deadline,” Jesse Granger, The Athletic, 03/30/21). Still, it’s a credit to the executives’ trade record to this point that they are sufficiently armed to make a serious run without any upgrades.

I may be a Leafs fan at heart (I’ve witnessed their highs and lows first-hand as a Scotiabank Arena employee), but I’m also a veteran freelance sportswriter who loves a good story. And there’s been no better story in hockey over the past few years than the Vegas Golden Knights. I’m excited to be covering the NHL again on the Golden Knights’ beat.