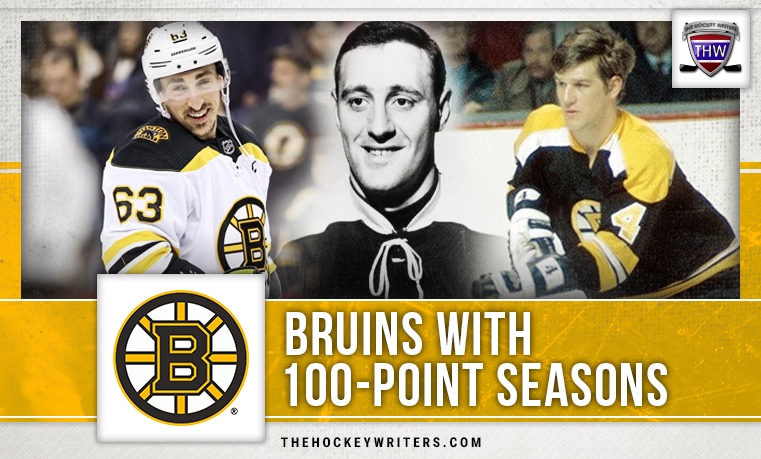 The Boston Bruins are one of the NHL’s oldest franchises. As such, the team has seen its fair share of legends pass through the city through multiple generations that will forever be cemented in history among the best of their time.

While there were many great athletes who have played for the Bruins, only a select few of the very best to have donned the Spoked-B on their chest managed to reach the always-impressive 100-point mark in a single season.

While some teams have never had a player record over 100 points in a season and many are limited to just one or two to have ever hit the mark, the Bruins have hit the double-digit mark with 10 different players to reach the impressive milestone.

It should come as no surprise that Phil Esposito was the first Bruin to record 100 points in a single season as he’s one of the first players in NHL history to reach the mark.

In the 1968-69 season, Esposito would score 49 goals and 126 points while leading the NHL in points. Three players reached 100 points that season with Gordie Howe and Bobby Hull rounding out the list, and this was the first season that saw any player achieved that milestone.

He’d reach the 100-point mark six times in his career, narrowly missing that mark in 1969-70 when he’d score 43 goals and 99 points before recording at least 127 points in each of the next five seasons.

As one of the best goal scorers in the history of the game, Esposito’s place on this list was surely deserved. He’s also a member of the incredibly exclusive NHL 600-Goal Club.

He’d never record more than 81 points in a season as a member of the New York Rangers following his trade from Boston, but he’d still be an effective player throughout the remainder of his career. Still, his time in Boston will always be what he’s remembered for despite starting his team in Chicago, ending it with the Rangers and being so instrumental in the founding of the Tampa Bay Lightning.

Only five defenders in history have had 100 points in a single NHL season. Only two have done so in multiple seasons.

Bobby Orr was the first to accomplish this feat in 1969-70, the only season that Esposito would fail to crack the 100-point plateau across his last full seven seasons as a Bruin. Orr wouldn’t be outdone by Esposito either as he’d record six consecutive 100-point seasons, including a season with 100 assists in the 1970-71 season.

It would be impossible to mention the Bruins of the 1970s without mentioning Johnny Bucyk. Lovingly referred to as “Chief” by those in Boston, Bucyk spent 21 of his 23 seasons with the Bruins and managed to hit the 50-goal mark and 100-point mark just once in his career with both instances occurring in the 1970-71 season.

Chief will forever be remembered as one of the very best to ever to play hockey not just in Boston but in the entire NHL.

Few left their impact on the Bruins organization quite like Bucyk and it isn’t hard to figure out why, either. The legendary forward would record 1,339 points as a member of the Bruins which is second to only Ray Bourque’s 1,506 points and over 300 points ahead of where Esposito finished with 1,012 points.

Ken Hodge Wouldn’t Be Left Out

Ken Hodge would record two 100-point seasons with the Bruins both in 1970-71 and again in 1973-74. For those keeping count, that would have given the Bruins four players with 100 points or more in the 1970-71 season with Hodge rounding out the bunch.

Hodge would spend nine seasons with the Bruins and five seasons split between the Chicago Blackhawks (prior to his time in Boston) and the New York Rangers (following his time in Boston). In his career, he’d score 328 goals and 800 points in 880 games, most notably scoring 289 goals and 674 points in 652 games in a Bruins uniform.

To say the Bruins had a strong roster in the 1970s would be an understatement and Hodge was a big part of what made those teams so special.

Five years isn’t a long time in the grand scheme of things, but considering how successful the Bruins were at producing 100-point seasons for a stretch in the 1970s, it felt like an eternity before “Nifty” Rick Middleton would reach the mark in the 1980-81 season.

He also reached at least 92 points in three seasons (one before his first 100-point season and twice in between his two 100-point campaigns) which is a testament to how dominant he was for so long.

Barry Pederson Was a Star in Boston

Barry Pederson was one of the all-time Bruins’ greats and it’s not surprising to see him make this list.

Taken with the 18th pick in the 1980 NHL Entry Draft, Pederson would score 44 goals and 92 points in 80 games in his rookie season before scoring another seven goals and 18 points in 11 postseason games that year.

To say expectations were high for the future for Pederson would be an understatement.

While Pederson may have been a blossoming star in Boston, that didn’t stop the team from moving him in one of the most famous trades in Bruins’ franchise history.

It’s also a trade that keeps on giving for the Bruins.

It’s rare for both teams to be so incredibly pleased with the results of a trade, but that was the case with the deal that saw Pederson traded to the Vancouver Canucks and future Bruins-president Cam Neely traded to Boston.

Pederson would never reach the 100-point mark outside of Boston and he’d finish his playing career with a 32-game stint in Boston in the 1991-92 season.

A fourth-round pick in the 1988 NHL Entry Draft, Joe Juneau exceeded all expectations as an NHL player.

While he’d only spend one full season in Boston, playing in 14 games in the 1991-92 season and being traded in the 1993-94 season, Juneau would still cement his name as one of the few players in Bruins history to reach the 100-point mark.

Juneau would later play for the Washington Capitals – to whom he was traded from Boston in exchange for Al Iafrate in a poor trade to say the least, the Montreal Canadiens, Buffalo Sabres, Ottawa Senators and Phoenix Coyotes. He’d score 156 goals and 416 points in 828 games.

Adam Oates Shined As a Playmaker

One of the best playmakers in the history of the NHL, Adam Oates would record four 100-point seasons in the NHL, two of which came with Boston during his six seasons with the team.

His best season in the NHL would come during the 1992-92 season when he’d score a career-high 45 goals, 97 points and 142 points in 84 games. He’d add nine assists in just four playoff games that season.

Though his tenure in Boston was shorter than many would have liked, he was still one of the most exciting players to watch during his time with the Bruins. In 368 games, he’d score 499 points. For his career, he scored 1,420 points in 1,337 games.

This one might still leave Bruins fans feeling sour. Drafted with the first overall pick in the 1997 NHL Entry Draft, Joe Thornton seemed like he’d be a life-long cornerstone player for the Bruins.

His tenure started off right as well as he proved to be a very good player early in his career. Included in that early success was his 36-goal, 101-point campaign in the 2002-03 season.

Thornton would spend just eight seasons in Boston, including the 2005-06 season that saw him infamously traded after 23 games to the San Jose Sharks. That season, he’d lead the NHL in both assists and points with 96 and 125 respectively, including 92 points in 58 games with the Sharks alone.

Thornton is also in the 1,000-assist club and he has proven to be one of the best playmakers in the history of the NHL.

Brad Marchand the Most Recent Bruins to Score 100 Points

The most recent Bruin to reach the 100-point mark, Brad Marchand has become a cornerstone player for the franchise. From a fourth-line forward to the discussion of best player in the entire NHL, Marchand’s career-trajectory is an interesting one to say the least.

Though he may be best known as a pest who toes (and often crosses) the line between clean and dirty play to get under the skin of his opponents, Marchand’s ability to score and produce points while also playing excellently on both ends of the ice in all-situations make him an invaluable piece to a Bruins team that has remained competitive in the playoff race throughout his entire career.

A leader on the Bruins, Marchand would elevate his game to an entirely new level during the 2018-19 season when he’d score 37 goals and 100 points in 80 games, the highest mark of any Bruin since Thornton was still on the team.

Brandon Share-Cohen has covered the NHL and various professional sports for six years. Working with The Hockey Writers, Brandon works extensively on covering the Boston Bruins in addition to his role as the News Team Lead.