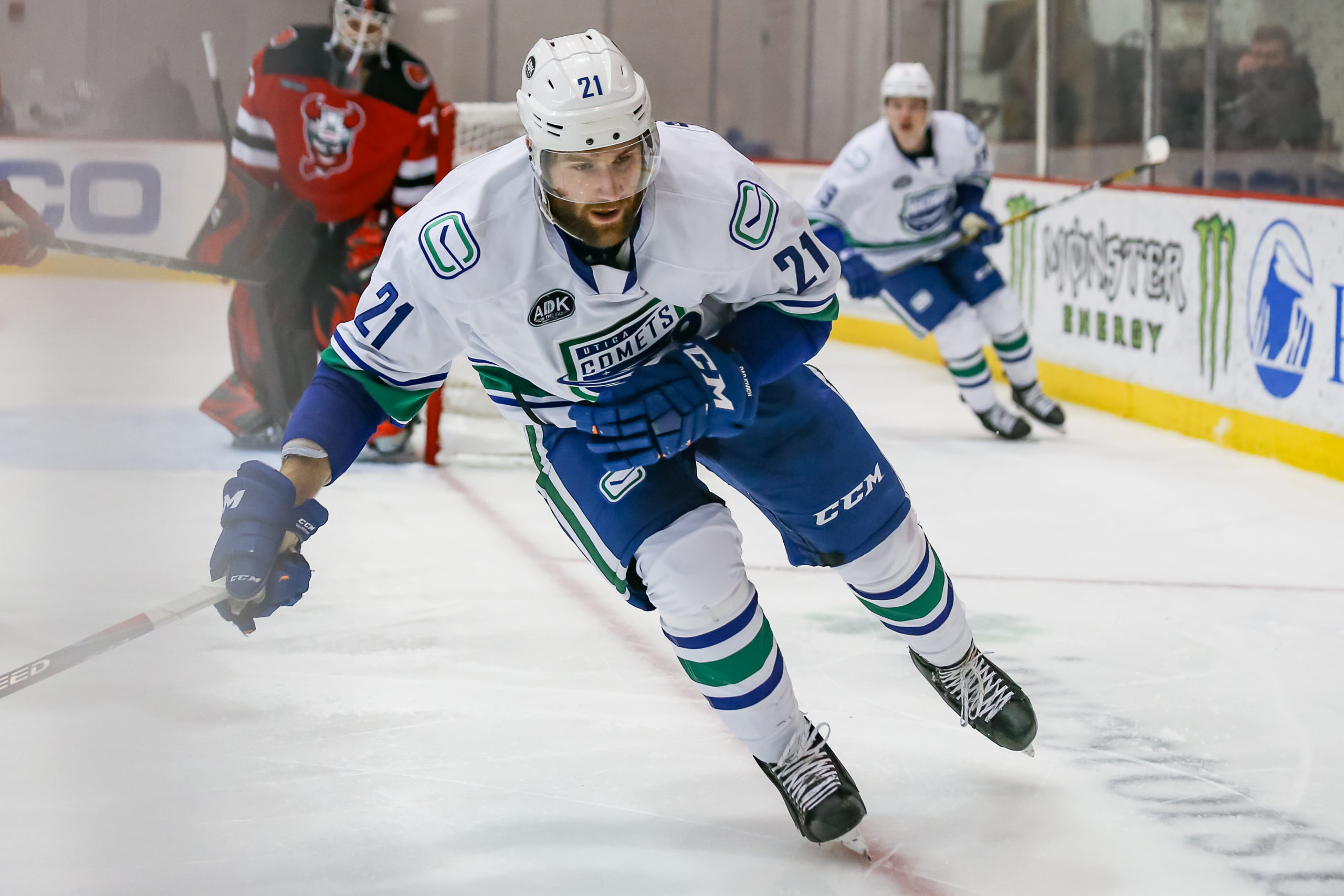 After three straight losses, the Vancouver Canucks’ playoff hopes are fading fast. That means they should be looking to the future and starting auditions for next season. With the number of promising prospects in the pipeline, namely the Taxi Squad and the Utica Comets, they have plenty of options to choose from should head coach Travis Green decide to go that route. With all that said, let’s take a look at the three that should be at the top of his list.

The Kole Lind train has been idling in the station long enough. After a strong start to his third season in the American Hockey League (AHL) that saw him jump out to five goals and eight points in eight games, he is ready to get some reps in the NHL. The 6-foot-1 Shaunavon native has made huge strides since his rookie season, and now looks every bit of the player the Canucks drafted 33rd overall in 2017. He was not only one of head coach Trent Cull’s most trusted players, but he also centered the top line as a converted winger and has added faceoff prowess to his repertoire.

The versatility Lind can now bring to an NHL lineup will be invaluable to the Canucks in the future. With Adam Gaudette in the Chicago Blackhawks’ system and Brandon Sutter approaching free agency, the third line center position is wide open for the taking. If his newfound confidence in the faceoff circle can be translated to the NHL, he could become the next Maxim Lapierre, albeit with more offensive flair. In the WHL with the Kelowna Rockets and now in the AHL with the Comets, he has shown an uncanny ability to get under the skin of his opponents, which could come in handy as a bottom-six pivot.

Lind had a solid debut in the NHL on Thursday, logging a little over 17 minutes of ice time both on the third line and in the top six. He showed off his impeccable forechecking skills, drove play with his speed, and generated two shots on Toronto Maple Leafs’ goaltender David Rittich. In the coming games, Green should continue using him all over the lineup and even at center ice to gauge his abilities against NHL talent in the faceoff circle. I also wouldn’t hesitate to place him in Brock Boeser’s spot on the power play, a position he excelled at in the AHL.

In other words, Lind should be used as a top-six forward in place of Travis Boyd, Jimmy Vesey, and Matthew Highmore. The Canucks need to see what they have in the 22-year-old and these last 12 games are as good a time as any to see where he is at in his development.

Jack Rathbone has been ready for the NHL ever since he graduated from the NCAA’s Harvard Crimson last season. In all honesty, he should have begun the season in the starting lineup instead of the Taxi Squad. His hockey IQ, booming shot from the blueline, and elite mobility would have been a welcome sight to a blueline that has struggled at times to move quickly and efficiently out of its own zone.

When the Canucks finally sent Rathbone down to the minors to continue his development, he quickly confirmed to everyone that he was not all hype. He dominated the AHL from the minute he stepped onto the ice with his first three professional points in his first game, all while displaying the elite attributes I mentioned earlier. He didn’t stop there either, as he continued to put up points until he was up to nine in his first eight games, which also included his first two goals.

It didn’t take long for Cull to name Rathbone his power play quarterback, as he was elevated to the top unit in short order. Paired with fellow rookie Jett Woo five-on-five, he also helped push his game to another level as Woo became more and more noticeable as the duo gained chemistry.

With the entire defence core healthy, it’s unclear who the Canucks would take out in favour of him. All I know is, a spot should be freed up because Rathbone is ready to take off into NHL stardom. All they need to do is let him out of the starting blocks.

Jonah Gadjovich has been a revelation this season with the Comets and by extension the Canucks as well. Since the beginning of the 2020-21 campaign, he has burst onto the scene with a career-high 14 goals in 18 games. He is seemingly scoring at will right now and has become one of the AHL’s most lethal goal scorers.

The 6-foot-2, 209-pound behemoth has been a menace in front of the net all season, frustrating goaltenders by banging in rebounds, deftly tipping pucks, or simply just being a screen. He also has shown no fear busting to the net, which has conjured up images of Todd Bertuzzi in his hay day with the West Coast Express. Granted, he was 6-foot-3 and 245 pounds, but just the fact that Gadjovich is willing to go to the net is half that battle, especially with the power forward potential he has.

With Jake Virtanen struggling to gain any sort of traction in the NHL as a power forward, Gadjovich could be in line to take his spot in the lineup. Everyone believes the Seattle Kraken would select him in the expansion draft if he was exposed, so why not put Virtanen there instead? Gadjovich definitely doesn’t have the blazing speed he has, but he uses his size and strength a lot more effectively, which could come in handy during the playoffs.

Canucks Should Be In Training Camp Mode

The Canucks should not be thinking about making the playoffs at this point. They should be thinking about the future and getting three promising prospects some NHL experience. With 12 games left on the schedule, this is the perfect time to experiment. Lind, Rathbone, and Gadjovich all deserve a chance to shine on the biggest stage, especially considering they have shone already on a lesser one. In a normal season, they would have already had their chance, especially with all the injuries that have felled the team already.

As for where they would line up, I would love to see Lind play center on the third line at some point, just to see how he stacks up against other NHL centers in the faceoff circle. Gadjovich should see time on Horvat’s wing and on the first unit power play and Rathbone should take the spot of Olli Juolevi on a pairing with Tyler Myers. Of course, he would see power play time as well, preferably on the first unit with Quinn Hughes, just for the simple fact of excitement and intrigue.

All in all, the Canucks need to start thinking about next season and where these three will potentially fit into the lineup. Too bad Vasily Podkolzin wasn’t also in the mix, or a line of Podkolzin, Horvat, and Gadjovich might have been a reality as well. Oh well, I guess we will just have to wait until next year to open that particular gift from the hockey gods.

My name is Matthew and I cover the Vancouver Canucks, and Vancouver Giants here at the Hockey Writers. I am also the head of the prospects and NHL Draft coverage. In addition to writing, I host the Canucks & Pucks podcast as well. I am passionate about the Canucks, prospects, and all things hockey.