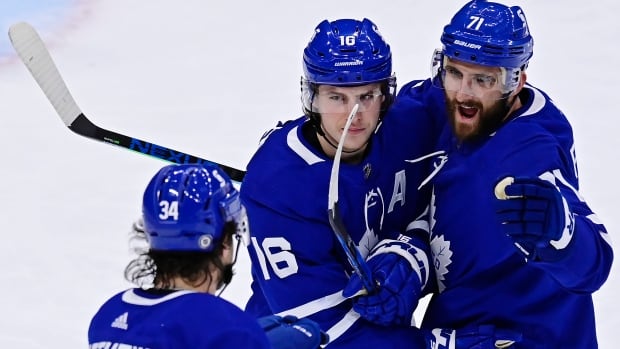 Auston Matthews and Mitch Marner have been close friends off the ice since arriving in the NHL.

Their connection on it has reached new heights in 2021.

Matthews finished off a pair of Marner setups to score his NHL-best 37th and 38th goals of the season Saturday as the Maple Leafs downed the Vancouver Canucks 5-1 for their fifth straight win.

“It’s one thing to have some chemistry,” Toronto netminder Jack Campbell said of the dynamic duo. “It’s another to have the talent they have and to use it together for the (betterment) of the team. They both have the team in mind in all the plays they make.

“Coming back in the defensive zone, making great plays, and then it leads to those highlight-reel plays you see on the TV every night.”

Matthews’ 38 goals have come in just 47 games — he missed four with a wrist injury — and he’s found the back of the net a jaw-dropping 17 times in his last 17 contests.

Matthews extended his NHL goal-scoring lead while Toronto increased its division lead by rolling over Vancouver. 1:08

“It’s unbelievable,” Leafs winger Alex Galchenyuk said of the No. 1 pick at the 2016 draft’s relentless pursuit of his first Maurice (Rocket) Richard Trophy as the league’s top goal scorer. “A one-of-a-kind player.”

The 23-year-old sniper’s second of the night was his league-best 12th game-winner, and moved him one back of Charlie Conacher’s franchise-record of 13 in a season.

“He’s feeling it,” head coach Sheldon Keefe said. “The chemistry between he and Mitch is obvious. He went through a tough stretch where he battled through injuries.

Galchenyuk, Adam Brooks and Joe Thornton, into an empty net, also scored for Toronto (33-13-5). Campbell stopped 26 shots as the division-topping Leafs finished 5-3-1 against the Canucks in 2021.

Tanner Pearson replied for Vancouver (19-23-3), which got 25 saves from Thatcher Demko. After beating Toronto twice at home coming off their COVID-19 shutdown that saw 21 players and four staff members test positive, the Canucks have lost five of six — and four in a row in regulation.

“A couple turnovers they were able to capitalize on and that was the difference,” Demko said. “But overall I thought it was a pretty good effort.”

Vancouver announced before the game forward Jake Virtanen has been placed on leave following “concerning allegations” of sexual misconduct. The team released a statement saying it “does not accept sexual misconduct of any kind and the claims as reported are being treated very seriously.”

The Canucks added they have “engaged external expertise” to assist in an independent investigation. Head coach Travis Green declined to answer any questions on the situation in his pre-game media availability, including if Virtanen is still with the team or when he learned of the allegations.

“We were focused on playing,” he said. “That’ll be our mindset going forward.”

On the other side, Nick Foligno picked up an assist in his first game at Scotiabank Arena since coming over in a deal with the Columbus Blue Jackets prior to last month’s trade deadline.

Sporting the same No. 71 his dad, Mike, wore when he played for the Leafs in the early 1990s, the veteran forward sat out his new team’s 4-1 victory over Vancouver on Thursday along with Campbell, and defencemen Morgan Rielly and Jake Muzzin, with an eye towards managing wear and tear ahead of the playoffs.

Tied 1-1 through 20 minutes, the Leafs took their first lead 3:50 into the second period when Marner stole the puck from Alexander Edler and found Matthews in front to fire home his 38th.

In our weekly segment, Rob Pizzo catches you up on the week that was in the all-Canadian division in the NHL. 3:29

The puck actually took a deflection off the Canucks blue-liner, who was on the wrong end of a fight with Wayne Simmonds on Thursday for his knee-on-knee hit on Toronto’s Zach Hyman when the teams played last month, and fooled Demko.

“He’s done an amazing job in the offensive zone getting himself open,” Marner said of Matthews. “He can shoot the puck from really wherever in his stance.

Matthews has been making the case this week that Marner, who sits third in NHL scoring with 64 points, doesn’t get talked about as much as he should for his contributions.

“Like I said the other night, I don’t know if he gets enough credit with what he’s been doing this year,” Matthews said. “He’s just a blast to play with.

“We both complement each other well.”

‘When we need a save he’s coming up huge’

Pearson had a golden opportunity to double his tally after putting Vancouver up 1-0 in the first off a Matthews turnover in front of his own net moments earlier, but Campbell, who’s now 15-2-1 on the season, was there with the glove.

“Soup’s been playing awesome,” Matthews said. “When we need a save he’s coming up huge.”

Toronto stretched its advantage to 3-1 at 4:55 of the third when Brooks, who continues to solidify his spot on the fourth line alongside Thornton and Jason Spezza, tipped Justin Holl’s one-timer for his fourth.

Galchenyuk added his fourth at 11:39 before Thornton buried his fifth into an empty net with two minutes left.

“Our team realized it’s time to really dial in the details of our game,” said Keefe, whose team is inching towards the division crown with five games left on its regular-season schedule. “There’s been a real shift there for us.

“And then any time we’ve had breakdowns since that Vancouver trip, our goaltending has been excellent.”

The Canucks, who registered just two shots in Thursday’s opening period, got on the board with 6:32 left in the first when Pearson fired his 10th through a screen off Campbell’s far post.

The Leafs responded just 1:56 later when Foligno and Marner combined to find Matthews in front to score his 37th on a shot that went off J.T. Miller’s stick, the post and past Demko.

“He’s just amazing,” Campbell said of Matthews with a chuckle. “It’s crazy. He’s a gifted player and a gifted person. He’s just a special guy. It doesn’t go to his head. He works every single day. He’s a great teammate. Any time you have a superstar like that and somebody who brings it like that every single night, it’s just a lot of fun.