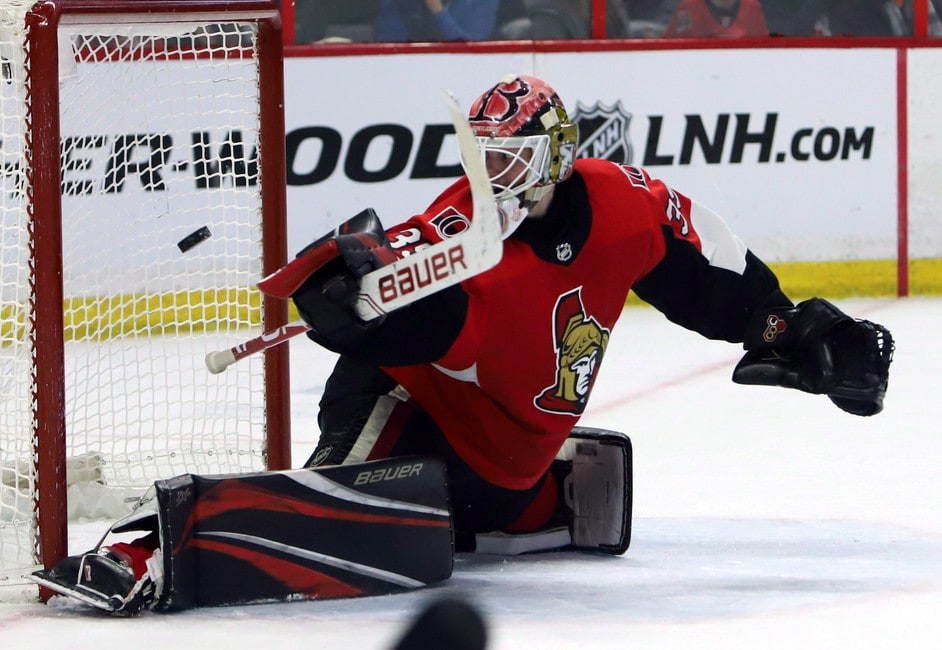 When the 2020-21 NHL season began, Marcus Hogberg was in a good position as the Ottawa Senators’ backup goalie. However, as the season winds down, his future in Ottawa and in the NHL are up in the air as his contract is set to expire. Simply put, the pending restricted free agent got off to an awful start, and then he got hurt. Although he did get some time in the crease in late April, thanks to a couple of injuries, was it too little, too late to earn a contract extension?

Matt Murray is the present and immediate future of the Senators’ goaltending. However, Hogberg played well in Belleville, and after an injury ended Anders Nilsson’s 2019-20 season, he got the opportunity to play as the backup. Hogberg appeared in 24 games, starting 21 of them for a 5-8-8 record, a 3.12 goals-against average, and a .904 save percentage. Those numbers are impressive when you consider that the Senators were dismantling their team for a rebuild, they were weak on the blue line, and they were not winning games. Five wins in 21 games are not impressive, but getting points in 13 of 21 games as a bottom-three team was a remarkable feat.

As they say, things can always get worse, but when you look at the Senators, they started at worse and stayed there for the first month of the season. Poor defensive play, the inability to get the puck out of their zone, and the lack of offence from veteran players the team was counting on were all factors in a dreadful 2-12-1 start. On top of that, the Sens were not getting good goaltending. They weren’t even getting mediocre goaltending. If Murray got off to a slow start, Marcus Hogberg started in reverse.

In his first start of the season, Hogberg surrendered five goals in a loss to the Winnipeg Jets. His pedestrian save percentage of .865 in that game was his best through six games. He gave up five goals in each of his first three starts, four in his next, and then surrendered three on 13 shots in a forgettable game against the Edmonton Oilers that lasted 23:53.

There were signs of a turnaround on Feb. 13, when Hogberg stopped 30 of 31 shots in Winnipeg for a .968 save percentage. He got the start two nights later against the Toronto Maple Leafs and surrendered five goals, but the Senators pulled off the biggest comeback in franchise history to win 6-5 in overtime.

Hogberg saw 12 minutes of action on Feb. 18 in Toronto before he was sidelined with an injury. And as he and Murray both struggled to get healthy, Joey Daccord and Filip Gustavsson showed flashes of brilliance in replacement, and veteran backup Anton Forsberg was claimed off waivers from Winnipeg to help stabilize the situation.

Suddenly, with decent goaltending, the Senators were competitive and have become a playoff-calibre team through the second half of the season. Hogberg, meanwhile, was leapfrogged by three different goalies on the depth chart.

Hogberg Back in Goal

In April, Hogberg got another chance as injuries continued to plague the Sens’ goalies. On April 7, he made 31 saves and had a .912 save percentage against Edmonton. But with Murray healthy again and Forsberg was playing well, Hogberg was returned to the taxi squad.

Hogberg had one more shot on a western road trip after Forsberg was injured before the April 24 game against the Vancouver Canucks. Murray started the game but also got injured, and Hogberg was suddenly in goal again and stopped 18 of 20 shots, and despite the loss, he looked sharp. The teams returned to Ottawa for the next two games, and Hogberg posted a pair of wins. On April 26, he stopped 25 of 26 shots and two nights later, the Senators beat Vancouver 6-3, but Hogberg let in two third-period goals that were considered soft.

With only a handful of games left in the season, Hogberg’s opportunity to prove he belongs in the NHL is short. Murray re-established himself as a bona fide starter in the second half of the season and has found his game under new goaltending coach Zac Bierk. Filip Gustavsson excelled on all three teams he played for this season. He opened the season with Sodertalje SK in Sweden and had a .919 save percentage, and he had a .910 save percentage in 13 games with Belleville in the AHL. With the Senators, he has a .940 save percentage and an impressive 2.06 goals-against average. That’s in a five-game sample, but the Senators are intrigued by what they have seen from him.

With Ottawa’s talented young goaltending depth, there may be no room left for the 26-year-old Hogberg. There has always been interest in him in Sweden, where he was a star with Linkoping HC. He may find himself back there next season if the Senators don’t present him with a qualifying offer, and there are no other NHL takers.

It’s hard to make it in the NHL as a goalie, and it’s even harder to make it back to the NHL after you’ve lost your spot. In the last six seasons, Senators goalies Matt O’Connor, Andrew Hammond and Mike Condon have all had trouble finding their way back into the NHL. It took Chris Drieger until this season to find himself with a permanent backup role with the Florida Panthers. Unless Hogberg gets another shot this season and makes the most of it, he is at risk of joining this group.

Jeff Morris has been a hockey writer for more than 30 years. He began his career working for small town newspapers in Eastern Ontario before becoming the editor of Canadian Sports Collector magazine in St. Catharines, ON. While there, he also freelanced as a Buffalo Sabres beat writer. Morris would move on to Dallas to become the NHL brand manager at Pinnacle Brands, Inc. From there, he worked in the sports trading card and collectibles division at Shop At Home TV in Nashville and Denver, and then moved to Seattle to be the VP of Marketing at Pacific Trading Cards, Inc. in Seattle. He had continued to cover the NHL as a freelance writer, and while in Seattle, he became a weekly hockey columnist for ESPN.com. During the 2005 NHL lockout, he returned to Ottawa and became a newspaper and magazine publisher and editor, and was also an NHL contributor for Fox Sports Radio. He also began covering the NHL for Hockeyology.com, and also covered the Ottawa Senators for his own publications. He went to Carleton University to study journalism, and graduated as the school’s all-time scoring leader in football and was a conference all-star three times. He had several pro tryouts and played semi-pro football for 10 years while pursuing his career as an NHL writer. He remains involved in football as a coach and referee, and is a Canadian Football League off-field official.