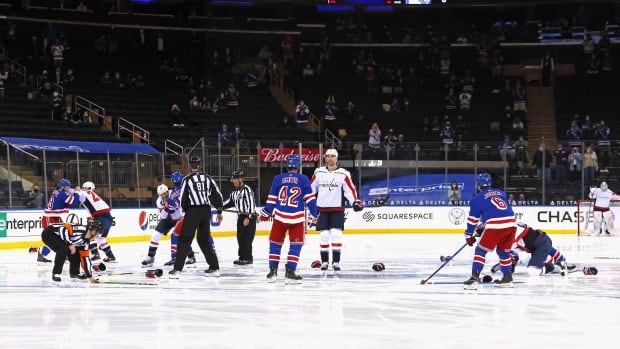 A line brawl featuring all six forwards erupted on the ice in the opening seconds of the game Wednesday after Wilson injured Rangers leading scorer Artemi Panarin in Monday’s contest.

The Rangers organization took exception to the NHL opting not to suspend Wilson and instead levying a $5,000 US fine, the maximum allowable under the league’s collective bargaining agreement.

The opening three fights were only a sign of things to come, as three more broke out in the first period alone, including Wilson taking on Rangers defenceman Brendan Smith.

As soon as Washington forward Tom Wilson steps on the ice for his 1st shift of the game, New York defenceman Brendan Smith instigates a fight with Wilson. 1:22

The on-ice actions may not have been the only repercussions of Wilson’s post-whistle takedown of a helmetless Panarin and punch to the back of Buchnevich’s head.

The Rangers fired president John Davidson and general manager Jeff Gorton on Wednesday, reportedly due to dissent over whether to release a team statement Tuesday targeting NHL senior vice-president of player safety George Parros for his inaction against Wilson.

“Wilson is a repeat offender with a long history of these type of acts and we find it shocking that the NHL and their Department of Player Safety failed to take the appropriate action and suspend him indefinitely,” the Rangers said.

“Wilson’s dangerous and reckless actions caused an injury to Artemi Panarin that will prevent him from playing again this season. We view this as a dereliction of duty by NHL Head of Player Safety, George Parros, and believe he is unfit to continue in his current role.”

Wilson was given a double-minor penalty for roughing and a 10-minute misconduct. The fine represents 0.12 per cent of Wilson’s $4.1 million salary for this season.