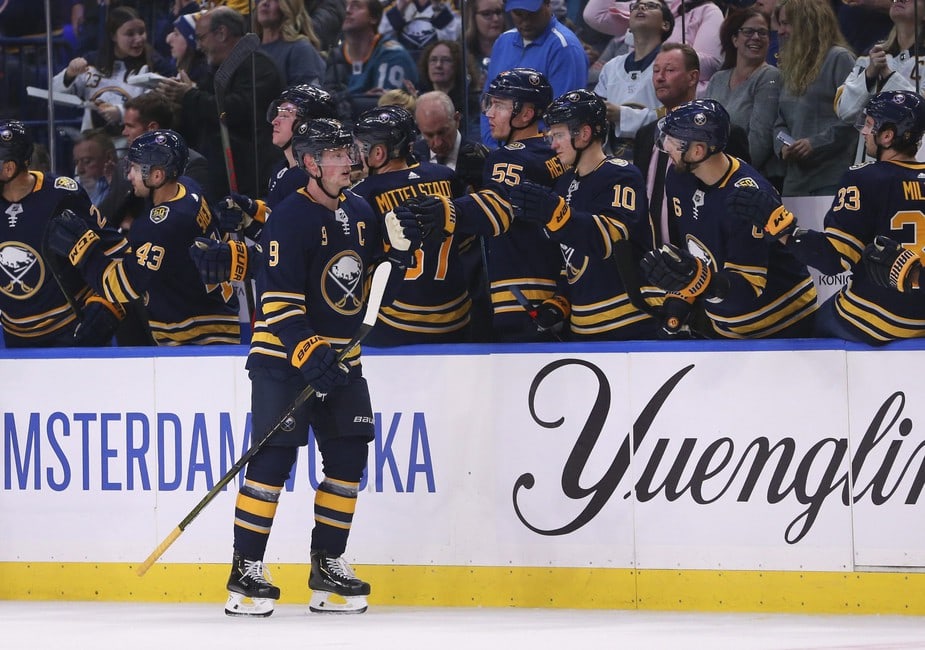 In today’s NHL news and rumors rundown, defenseman Rasmus Ristolainen says he doesn’t care one way or the other if the Buffalo Sabres trade him. To make matters worse, Jack Eichel has potentially asked the organization to trade him. Meanwhile, could Jaroslav Halak be playing his final games with the Boston Bruins? Will Alexis Lafreniere play for Team Canada at the IIHF World Championships? Finally, what coaching candidates could replace Rick Tocchet in Arizona?

Sabres Ristolainen Happy to be Traded

Ristolainen has told the Sabres that he’s totally alright with the idea of the organization trying to trade him in the offseason. The blueliner has one more season at $5.4 million left on his current deal and if the team wants to move that money, he’s more than willing to go elsewhere.

Ristolainen said during his season-ending press availability on Monday that he told general manager Kevyn Adams that he’s open to be traded. He’s frustrated with losing and he’d like to be in the playoffs next season. That said, he added if the Sabres can be a competitive team and fight for a playoff spot, he’s okay with staying.

“I’m open for all the ideas,” the 26-year-old said. “Right now, it’s hard. Obviously the season just ended, so, yeah, I’m frustrated and I’m pissed and it sucks. So I told [Adams] I’m open for all the scenarios: staying, or if he trades me, I’m fine with that, too.” Over the course of his seven-year career, Ristolainen has never played a playoff game. He’s looking to change that. He noted, “We have to get to the playoffs next year. For me, it’s either here or hopefully somewhere [else].”

Has Eichel Asked for a Trade?

As per Elliotte Friedman, “Jack Eichel admits he’s “upset” about the way things have been handled since his injury. Says there’s “been a bit of a disconnect” between him and the Sabres. Friedman goes on to say that Eichel wouldn’t discuss if he’s asked the team to trade him but he didn’t deny asking. All he would say is that he hasn’t played as well as he would have liked and has a lot of thinking to do.

Eichel, 24, has five seasons left on his contract that pays him $10 million per season and worth noting is the fact his no-trade protection doesn’t come into effect until the 2022-23 season.

Halak Done with the Bruins?

Jimmy Murphy of Boston Hockey Now reports this season could be Jaroslav Halak’s last as a Bruins goaltender. The team and the player had explored the idea of a contract extension a couple of months ago but a source said the play of Jeremy Swayman has changed the organization’s outlook on extending Halak.

Swayman’s emergence has made Halak expendable and if Rask wants to return, there’s no reason to assume the Bruins and their starter won’t work something out. The Bruins could run with a one-two punch of Rask and Swayman, hoping that Swayman proves himself to be capable of the starting role when Rask chooses to retire.

As is being reported by Larry Brooks of the New York Post, New York Rangers rookie Alexis Lafrenière is expected to decline Team Canada’s invite to play at the IIHF World Championship. This after news that both defencemen Adam Fox and K’Andre Miller have declined invites from the United States to play at the tournament in Latvia later this month.

After news the Arizona Coyotes and head coach Rick Tocchet have agreed to part ways, Pierre LeBrun notes that the organization will have as many as 10 different coaching candidates to take his place. Among them, Mike Van Ryn, Rocky Thompson, Lane Lambert and Brad Larsen.

It is not believed the team will reach out to former Blue Jackets coach John Tortorella, Claude Julien, Bruce Boudreau or Gerard Gallant.

Preds’ arena latest in NHL to require test or vaccination
NHL Rumors: Oilers, Blues, Coyotes, Maple Leafs, More
OHL to require proof of full COVID-19 vaccination at Ontario facilities
Jets Are Still Chasing the Avalanche Despite Offseason Moves
NHL expects 98 per cent of players to be vaccinated prior to start of season