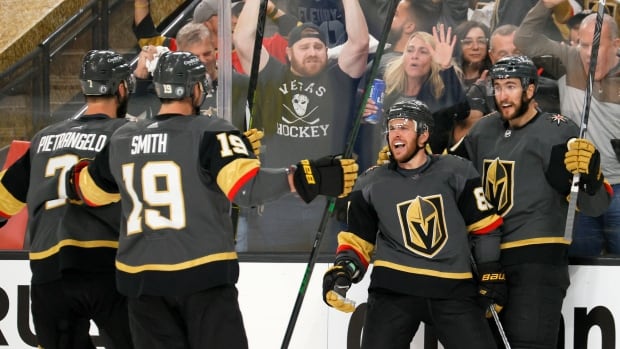 After the Vegas Golden Knights lost the first two games of their second-round series against the Colorado Avalanche, captain Mark Stone said no team is out of a series until it loses at home.

After sweeping two in Vegas, the Golden Knights are back in business.

Jonathan Marchessault had his fourth career hat trick to lead Vegas to a 5-1 victory over the Avalanche on Sunday night to tie their second-round series at two games apiece.

Two days after his tying goal sparked a come-from-behind win in Game 3, Marchessault got his third three-goal game with the Golden Knights. The eight-year veteran also had one while with Florida.

“If we win as a group, it’s the most important thing,” Marchessault said. “And we’ve proven we can play with the best team in the league. We’re on a mission right now. We just have to keep going and focus on Game 5.”

Max Pacioretty and Patrick Brown also scored for Vegas, while Marc-Andre Fleury made 17 saves for his 87th career playoff victory — one shy of tying Ed Belfour for fifth on the all-time list.

Jonathan Marchessault potted three goals in the Golden Knights’ 5-1 win over the Colorado. 1:56

The game was played in front of an announced crowd of 18,081 — the largest to attend an NHL game this season.

“It’s loud — it’s hard to hear anything in there,” Colorado coach Jared Bednar said about Vegas’ home crowd. “You can tell by my voice, just talking on the bench trying to call the next line, I’m losing my voice. There’s a lot of noise in this building.”

Game 5 is Tuesday night in Colorado at 8 p.m. eastern which can be seen on CBC and CBCSports.ca, where the Avalanche have yet to lose a playoff game and were 24-4-2 during the regular season. The Golden Knights handed the Avs two of their six home losses this season.

“We didn’t think we were going to come in here and take both games,” said Brandon Saad, who had the only goal for the Avalanche. “We didn’t play as good as we should’ve, but we’re going back to the building where we have success and we play well at.”

Philipp Grubauer, who came in with a .941 playoff save percentage, stopped 30 shots for the Avalanche.

Coming out of a grueling seven-game series against Minnesota, and opening the second round on just one day of rest, the Golden Knights were pummeled 7-1 in the series-opener. They lost Game 2 in overtime, 3-2.

But Vegas has outscored Colorado 9-4 since the start of the second period in Game 2, and outshot the Avalanche 110-52 since the first period of the same game.

“I think we gave ’em a little bit too much respect,” Stone said. “Obviously in Game 1, we kind of sat back, we just kind of dipped our toe. I think after the first period in Game 2, we realized we could play with these guys.”

‘We’ve got work left to do’

After Saad gave Colorado a 1-0 lead less than two minutes into the game, the Golden Knights dominated. Whether they were exiting the defensive zone and building steam in the neutral zone, keeping pressure on Grubauer, or neutralizing the Avalanche’s speedy top line, the Knights controlled the action for much of the night.

Marchessault tied it at 1 after linemate Reilly Smith’s backhand caromed off the crossbar with what Grubauer thought was a goal as he appeared dejected and took his focus away from the action. William Karlsson threw the puck at the net and Marchessault was there for a redirect into a wide-open net.

On the first shift of the second period, Stone led a 3-on-2 rush from the defensive zone and as they crossed the red line, fed Pacioretty, who skated in and scored on a wrist shot from the top of the left circle to the far side.

Later in the period, on a power play, Alex Pietrangelo drew all four Colorado skaters in his direction, leaving Marchessault wide open and with a perfect view of the net. Pietrangelo sent a soft pass to Marchessault, who blasted a one-timer past Grubauer, making it 3-1.

Marchessault completed the hat trick six minutes into the third period, when he took Smith’s cross-ice pass and buried it to give Vegas a commanding three-goal lead.

Brown, who wore the captain’s “C” on his sweater during the AHL season with the Henderson Silver Knights, sent a chip shot at Grubauer, who slid behind the goal line with the puck to provide the final margin.

“It was nice to score some goals tonight,” Vegas coach Peter DeBoer said. “I think our group got rewarded for keeping the relentless pressure on Colorado that I think we’ve been putting on them for three games, both physically and with the pucks. We’ve just got to continue to do that and hope we stick enough pucks to the net every night to win.

“We’ve got work left to do, but we like where we’re at tonight.”

WATCH | How much is too much for showing violent hits on TV?:

Barzal scores winner as Islanders take down Bruins to even series
Wild Roster Could Look Very Different for the 2021-22 Season
Avs’ season on the line after G5 loss to Knights
The Canadiens are vying for their first Clarence S. Campbell Bowl
Newer Habs getting small taste of atmosphere in Montreal during NHL playoffs