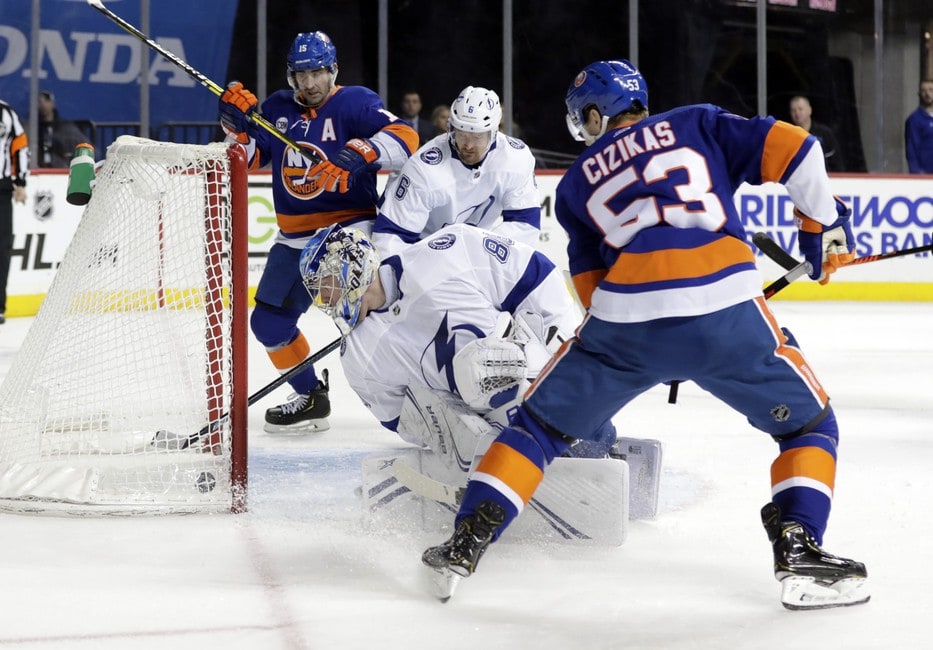 After splitting the first two games at Amalie Arena, the Tampa Bay Lightning and New York Islanders headed to a packed Nassau Coliseum for a pivotal Game 3. The crowd was energized, however, as the Islanders did in Game 1, the Lightning skated away with a 2-1 road victory and a 2-1 series lead. A few things stood out in this contest that were critical and could factor into the rest of this series.

In this semifinal series so far, goaltenders Andrei Vasilevskiy for the Bolts and Semyon Varlamov for New York have faced off against each other, and as in Tampa’s series againt the Carolina Hurriccanes, each team has won by no more than one or two goals. Both goalies have kept the goal-scoring down (Game 2 being the exception); Vasilevskiy made 29 saves off 31 shots in Game 1, while Varlamov stopped 30 of 31. In Game 2, Vasilevskiy handled 24 of 26 shots, while Ilya Sorokin (who came in after Varlamov temporarily left the game and stopped all six shots faced) and Varlamov combined for 29 saves on 33 shots.

It was noticeable early on that both netminders were dialed in, and in a game where any mistake could be costly, they kept it close. By the end of the night, 50 saves were made on 53 shots (Vasilevskiy made 27 of 28, while Varlamov blocked 23 of 25). Varlamov was the first to give up a goal after Tampa forward Yanni Gourde notched his third of the postseason to make it 1-0.

The defense on both sides played a significant role in helping their goalies. The Bolts led Game 3 with 21 blocked shots; 13 were from the backend led by Victor Hedman, who had four, followed by Ryan McDonagh and Mikhail Sergachev with three each. David Savard blocked two shots, while Erik Cernak had one. New York, meanwhile, had 15 blocks of their own, 12 of them from their defense: Nick Leddy had two, Adam Pelech had two, Ryan Pulock had three, Noah Dobson had two, and Scott Mayfield had three.

The Islanders took it to Tampa in the hit column, which was a great way to get the home crowd even more fired up. Pelech led New York with six hits, Pulock threw five, while Dobson had three, Mayfield had two, and Andy Greene had one. The team laid 39 hits to the Lightning’s 26, led by Sergachev, who had five hits, while the next top two contributors were forwards Ross Colton (with four) and Anthony Cirelli (with three).

The Lightning’s stars have carried them throughout the regular season and through the playoffs. However, forward Brayden Point has consistently been the best so far, and he proved it again in Game 3 when he scored the eventual game-winner. He made franchise history with a goal in six consecutive postseason games.

Before Point’s goal, the game was tied at one after the Islanders capitalized on a mistake made by Cernak. In a scramble around the Bolts’ net, he tried to dish the puck to Vasilevskiy to cover it – instead of skating away with it or throwing it in the corner – but the puck went in the net. That tally was credited to Islander winger Cal Clutterbuck.

A couple of minutes later (the final minute of the second), Point got the lead back after the Islanders had successfully killed off a penalty. A shot from Hedman landed on Point’s stick, who was knocked down by Islanders forward Casey Cizikas as he shot the puck past Varlamov to make it 2-1.

Given the many fantastic players who have suited up for the Lightning – like Martin St. Louis, Vincent Lecavalier, and Steven Stamkos, among others – but Point was the one to reach that scoring streak record. He has become a dominant player in Tampa, and there are no signs that he will slow down anytime soon.

Islanders general manager Lou Lamoriello is an NHL legend. He put together some of the best New Jersey Devils squads of all time, he’s a big reason the Toronto Maple Leafs have been successful in their most recent rebuild, and he has molded the Islanders into one of the biggest threats in the league after former captain John Tavares left for Toronto in the summer of 2018. He is among the most well-respected hockey minds ever, which is why he’s already in the Hockey Hall of Fame today as a builder (Class of 2009).

The Islanders have a lot of threats in their lineup. Mathew Barzal comes to mind, so do Anthony Beauvillier and Brock Nelson, while Cizikas is arguably one of the best bottom-six forwards in the NHL. The team has stellar depth, and Lamoriello deserves credit for acquiring Kyle Palmieri and Travis Zajac from the Devils during the season, specifically Palmieri. The two arrived in exchange for A.J. Greer, Mason Jobst, New York’s 2021 first-round draft selection, a conditional 2022 fourth-round pick, while New Jersey retained half of both players’ salary.

Palmieri has been fun to watch. He is tied for the most goals on the club i the playoffs with seven along with Nelson. He has nine points in 15 playoff games, ranked seventh on the team behind Jean-Gabriel Pageau (another great Lou trade from last season), Josh Bailey, Nelson, Barzal, Beauvillier, and Jordan Eberle. Palmieri has held his own among a talented group. He does not have to be the offensive leader he used to be. He has a great cast around him to help carry the load, making his share a little easier. Here is his goal breakdown with the Devils between 2015-16 and 2019-20:

Palmieri didn’t score in Game 3, but he still made his presence known. He had three shots on goal, four hits, and a little over 18 minutes of ice time. Tampa Bay has done a good job of keeping him off the board, which the Boston Bruins were not able to do in the last round (with four goals and six points in six games). The Lightning have their hands full with the other lethal weapons on the Islanders, but Palmieri needs to be watched, because he will burn them if he is not contained.

The Lightning came out victorious in Game 3 playing in a notoriously difficult stadium for the road team, Nassau Coliseum. It’s a tough blow not to win at home, as Tampa Bay already knows in this series. The Lightning are in good shape as long as they maintain their well-oiled machine and everyone plays up to their abilities. The Islanders have a lot of their own firepower and they will come back with a vengeance in Game 4. Tampa Bay has the tools to shut things down, so another win at Nassau, will be all but the nail in the coffin heading back to Amalie Arena for Game 5.

I have been a hockey fan for most of my life, and have played the game myself for more than six years. I graduated from the State University of New York at Oswego in 2018, with a bachelor’s in Broadcasting & Mass Communication. Previous positions held include being a Sports Analyst for Oswego’s student-run TV station, WTOP-10; News/Sports Intern for WIVB-TV Channel 4; and Sports Beat Writer Intern for Pro Player Insiders.