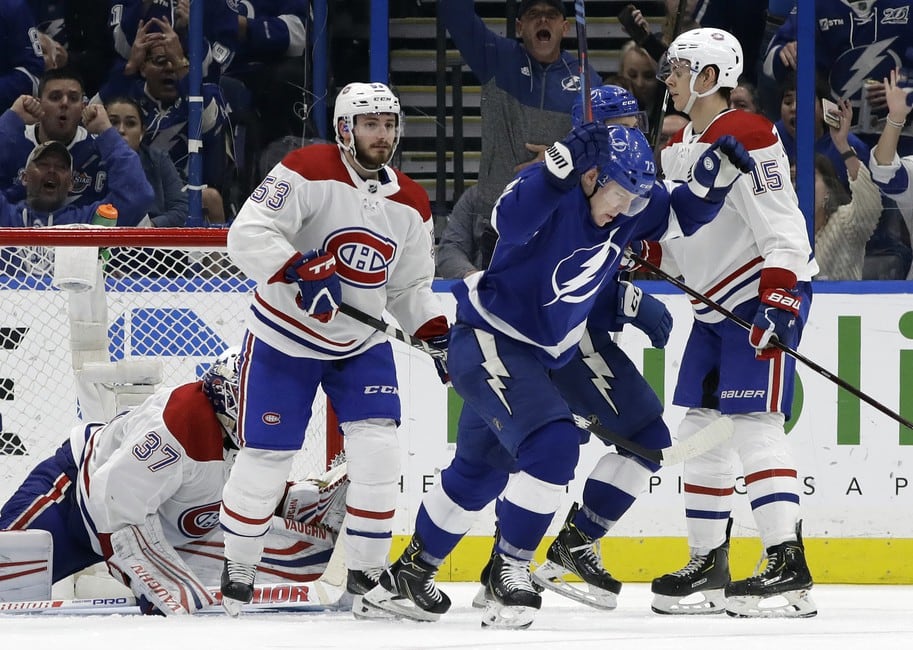 The Montreal Canadiens have been a great team for hockey fans that love to root for the underdog. So far, they have managed to upset three heavily favored teams in a row to grant them the right to compete for the Stanley Cup. The matchup with the Tampa Bay Lightning is the first time the fabled Habs has made it this far since the 1992-93 season. Unfortunately, the team they’re facing this time around is miles better than the Los Angeles Kings those Canadiens faced so many years ago.

The harsh reality is this. In terms of record, the Canadiens came into the playoffs as the 18th ranked team in the NHL. Now, the old mantra of “just get into the playoffs and anything can happen” still holds true. Sometimes the records don’t seem to matter and we get a thrilling yet improbable upset. Nonetheless, most often, things play out how they should on paper. Reality is the gap between these two teams is greater than any two Cup Final participants in recent memory.

The 5-1 drubbing in favor of the Bolts in Game 1 was even less competitive than the score. The speed and forechecking prowess the Lightning showed made breakouts from the Montreal defensive zone nearly impossible. It took the Habs more than two-thirds of the game to finally reach double digits in shots on goal. The loan goal they managed to score was a seeing-eye pinball shot that changed direction about three times en route to the back of the net. Other than that, Lightning netminder Andrei Vasilevskiy had a pretty easy night.

The Lightning Have a More Talented Team

Let’s give the Habs some credit, they do have a deep and talented crop of forwards. Phillip Danault has blossomed into an elite shutdown defensive center. Montreal’s second line consisting of Tyler Toffoli, Nick Suzuki and 2021 Hobey Baker winner Cole Caufield have been immense these playoffs. Even grizzled vets like Corey Perry and Eric Staal have managed to keep Father Time at bay with solid, effective play throughout. Then you have agitator extraordinaire Brendan Gallagher, who always manages to get opponents off their game with his relentless tenacity.

That said, the group in Tampa is still a clear cut above. With the possible exception of Toffoli, none of Montreal’s top six forwards would come anywhere close to winning a spot over the current top six for the Lightning. A prime example is Nikita Kucherov, who has more than double the point production of anyone on the Habs in these playoffs. Toffoli, who leads the Canadiens in points, would be a distant sixth for Tampa. How about Brayden Point’s and his 14 goal output. His goal total is almost triple the number of goals scored by anyone on the Montreal roster. I’m sure by now you get the picture.

While looking at the two teams, the only position you could make any kind of argument for would be in goal. Carey Price has been simply sensational since coming back from injury right before the playoffs began. His record of 12-6 with a stat line that boasts a 2.18 goals-against average (GAA) and a .928 save percentage (SV%) is obviously phenomenal. The problem is the man he sees when looking down the ice between the pipes for Tampa. Vasilevskiy’s record is one better at 13-6 after the Game 1 victory with a stat line that includes a 1.94 GAA with a .936 SV%. For the first time in a playoff series this season, the Habs do not have the advantage in goal.

The Habs are a Proud and Hardy Group

None of this is to say that the Canadiens will simply lay down and let the Tampa train roll right over them. If they’ve proven anything as a team so far, it’s their resilience. Everyone in the hockey world thought after Game 4 of the first-round series with the Toronto Maple Leafs, it was over for Montreal. The Leafs had just blanked them 4-0 to take a commanding 3-1 series lead headed back to Toronto. Seven straight wins said otherwise with an overall record of 11-2 after the Game 4 loss to the Leafs before Game 1 against Tampa.

The thing is, the Leafs, Winnipeg Jets, even the superb Vegas Golden Knights are not on the same level as the Bolts. The Lightning is a battle-hardened group that has dealt with many deep trips through the playoff meat grinder. Since the 2014-15 season, Tampa has been to five Conference Finals and is currently in their third Cup Final. Conversely, Montreal is in its first Cup Final since 1992-93 with just one Conference Final win since the 2013-14 season.

The Lightning also has a decided advantage behind the bench and not just because Canadiens head coach Dominique Ducharme has been in COVID protocol. On February 24, 2021, Ducharme was promoted to interim head coach of the Canadiens, following the termination of Claude Julien and Kirk Muller. This is the only head coaching job he’s had at the NHL level. Bolts head coach Jon Cooper is in his ninth season at the helm, with the previous playoff accomplishments mentioned all happening under his watch.

The Lightning Present Lots of Problems to Most Teams

For much of the first three rounds, Montreal was able to play a structured, physical style that puts pressure on teams until they wilt and start making mistakes. The Habs became adept at capitalizing on those mistakes with goals while getting great goaltending from Price to slam the door shut. This was the formula used to win most games. Those tactics will not work against the Lightning, they’ve been down this road too many times to fall for it. They play their game with smart precision and fewer mistakes than their opponents. The Bolts are also notoriously difficult to rattle. Even when you try and out-muscle them, they just smile at you and keep on coming.

Then you have Tampa’s lethal transition game, something nobody has been able to deal with going on two seasons now. And after all that, the Habs must then overcome the aforementioned gap in talent. With all due respect to Vezina winner Marc-André Fleury, Vasilevskiy is better in goal than anybody else. Last season’s Conn Smythe winner, Victor Hedman, is the best blueliner in the league. In the playoffs, Kucherov is the best point-getter, Point is the best goal scorer, and we can go on and on. Defeating the Lightning is just too steep a mountain for this edition of the Montreal Canadiens, plain and simple.

The entire league underestimated the Habs coming into the playoffs and rightly so. The last 10 games of the regular season saw them go 4-6 while limping into Game 1 of the first round on a five-game losing streak. When you make it all the way to the Stanley Cup Final, however, nobody is underestimating anyone. The stakes are too high. Even if that wasn’t the case, this Lightning team learned a hard lesson back in 2018-19 against the Columbus Blue Jackets to ever take any team lightly again. Montreal has been a nice story, but the clock strikes midnight for this Cinderella squad in just a few more games.

Frank is a former competitive hockey player at the D3 college level. He’s what you’d call a hockey “lifer” having also worked as a hockey referee, time keeper and assistant youth coach, along with being a longtime member of USA Hockey. Frank comes to THW after contributing content on the Tampa Bay Lightning, Tampa Bay Buccaneers and Orlando Magic for BackSportsPage.com.