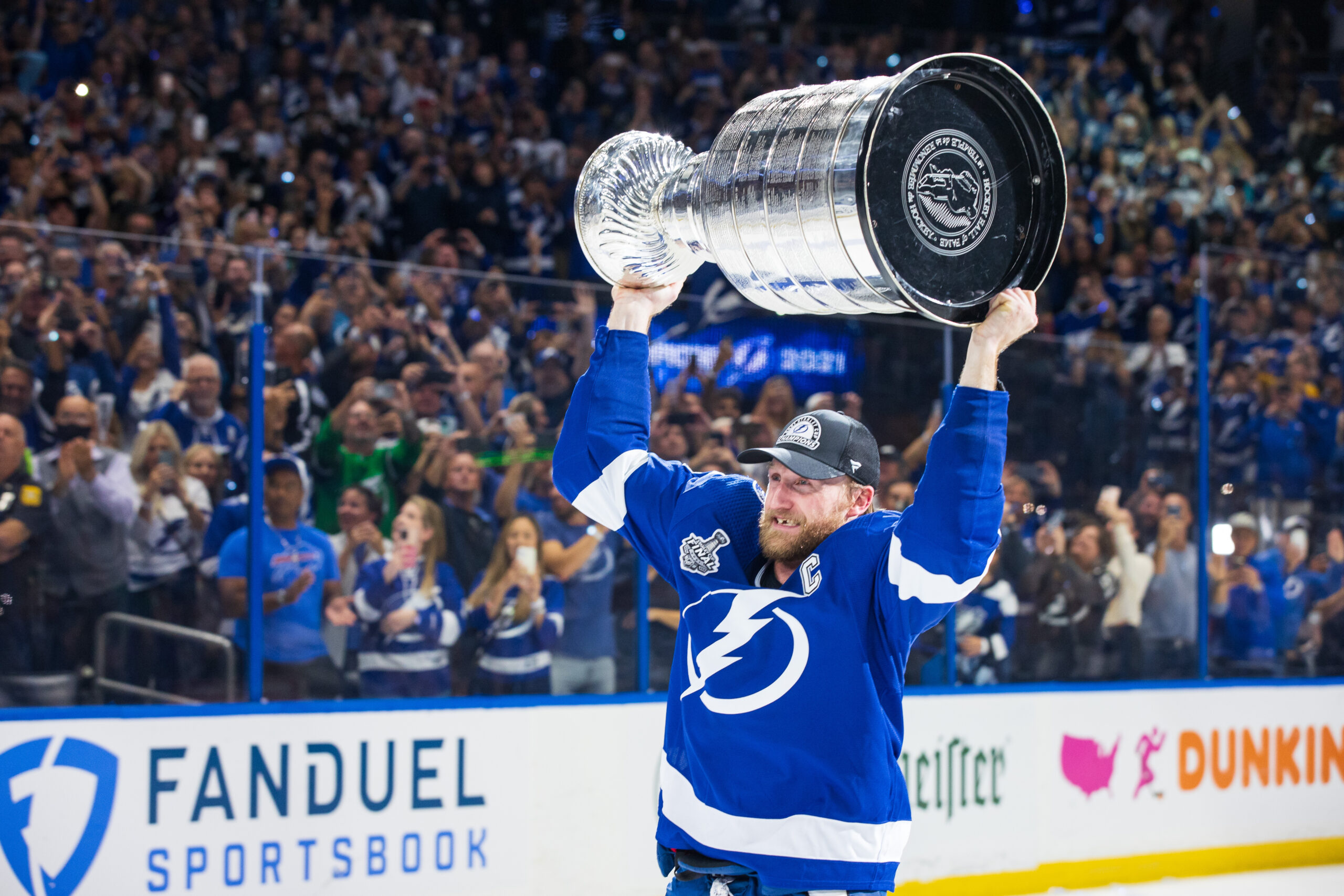 In this edition of Tampa Bay Lightning news and rumors, we’ll discuss trades, no-move clauses, the expansion draft, and more.

On Saturday, the Lightning traded Barclay Goodrow to the New York Rangers in exchange for their 2022 seventh-round pick. The Rangers now have exclusive negotiating rights with the 28-year-old forward until free agency begins on July 28.

It has been clear for some time that Lightning were never going to bring everyone back from their Stanley Cup-winning roster, but it is still tough to see key players leave. After coming to Tampa at the trade deadline of the 2019-20 season, Goodrow played an instrumental role in the Lightning’s back-to-back Stanley Cup championships. General manager Julien BriseBois likely knew he would not be able to afford to re-sign Goodrow. Thus, getting something for his negotiation rights was better than getting nothing. Goodrow was well-liked among the Lightning fan base and will be missed.

On July 12, the Lightning celebrated their Stanley Cup win with a boat parade on the Hillsborough River. Following the parade, the party was supposed to move to Julian B. Lane Riverfront Park. However, the event was canceled due to thunderstorms in the area. That didn’t stop the players from getting on stage and celebrating with fans, though.

One of the major headlines that came out after the parade was that the Lightning had dented the Stanley Cup. Although what happened was initially a mystery, Pat Maroon eventually came clean, stating:

“It was obviously raining and it was wet. I went to lift it, and I went backwards with it. I slipped and [Cup keeper] Phil [Pritchard] helped me up and the Cup went back on its end…People are saying we disrespected the Cup. That is such BS because if they had half a brain, you know it’s wet outside and you’d think we’d be throwing the Cup around? No. We didn’t disrespect it. It was a complete accident, and we both got hurt. My back has been hurt all day. So, that’s what happened. Nothing crazy.”

Ironically, the Stanley Cup was sent to Montreal for repairs. By Thursday, the Cup was ready for its celebration tour.

Each member of the Stanley Cup-winning roster from both the 2020 and 2021 Stanley Cup Playoffs will get to spend a day with the Cup. The first two stops on the tour were Ross Colton, followed by Kevin Shattenkirk.

It’s that time of year, again. The Steven Stamkos rumor mill began just a few days after the season ended. Will he retire? Will he be traded? In addition to the news that the Lightning did not ask Stamkos to waive his no-move clause ahead of the expansion draft, Brisebois put the rumors to rest on Wednesday, stating:

“I fully expect him to be in our lineup come opening night next fall.”

There you have it. The Lightning will have their leader and captain for the 2021-22 season. When healthy, Stamkos played a huge role for the team on and off the ice. Including the Stanley Cup Playoffs, he tallied 25 goals and 27 assists in 61 games played this season. The 31-year-old forward is under contract for three more seasons.

There’s another Stanley in Tampa, but this one has four legs. On Tuesday, Busch Gardens announced that a baby giraffe was born at the theme park. His birthday? July 7, 2021. The same day the Lightning clinched their second consecutive Stanley Cup. It is easy to see how the name came about.

Stanley is the firstborn calf of his mom, Angel. According to the park, they will stay behind the scenes until Stanley reaches certain growth milestones. Don’t worry, both mom and baby are doing great. To celebrate the Lightning’s Stanley Cup victory, visitors over the age of 21 will get two free beer samples when they visit the park until the end of July.

Teams in the NHL are notorious for keeping injuries disclosed throughout the season. However, after the playoffs conclude, the injuries are often made public. Here is a list of injuries that Lightning players had throughout the postseason:

If this isn’t proof that hockey players are warriors, I don’t know what is. Hedman tore his meniscus on March 30, meaning he played a whopping 42 games with the injury. He underwent surgery on Tuesday to repair it and has a recovery time of three to four weeks. Three days after Killorn broke his fibula in Game 1 of the Stanley Cup Final, he underwent surgery and had a rod inserted into the bone. Just six days after the injury occurred, he was skating again in an attempt to play in Game 4. Although he did not play in the series, he expected to play if the series extended. When discussing the injuries and the toughness of the Lightning players, BriseBois said,

“That’s how you win the Stanley Cup.”

Every player is expected to be healthy at the start of the 2021-22 season.

On Sunday, each team released their protection lists ahead of the expansion draft set for Wednesday, July 21. The league’s newest franchise, the Seattle Kraken, will pick a player from each team, excluding those who are protected. Each team had the option of protecting either seven forwards, three defensemen, and a goaltender or eight skaters and a goaltender. BriseBois decided to take the 8-1 approach. Here is the Lightning’s protection list:

Protecting Vasilevskiy was a no-brainer, but the protection strategy for the skaters is anything but. It seems that BriseBois is putting an emphasis on protecting the core of the defense, a strategy that is likely to give the Lightning their best chance at winning another Stanley Cup in the near future. However, several notable names are now exposed to the Kraken: Yanni Gourde, Ondrej Palat, Tyler Johnson, Alex Killorn, Mathieu Joseph, Jan Rutta, Ross Colton, and Cal Foote. We will not know whether a side deal has been made with the Kraken until the draft on Wednesday. Until then, we have to sit back, relax, and let BriseBois work his magic.

Andrew is a freelance writer who covers the Tampa Bay Lightning at The Hockey Writers. He is a passionate hockey fan who grew up near Tampa, Florida. He is a husband, father to a Golden Retriever, and is studying to be a Physician Assistant. Follow me on Twitter: @Andrew_Mulville