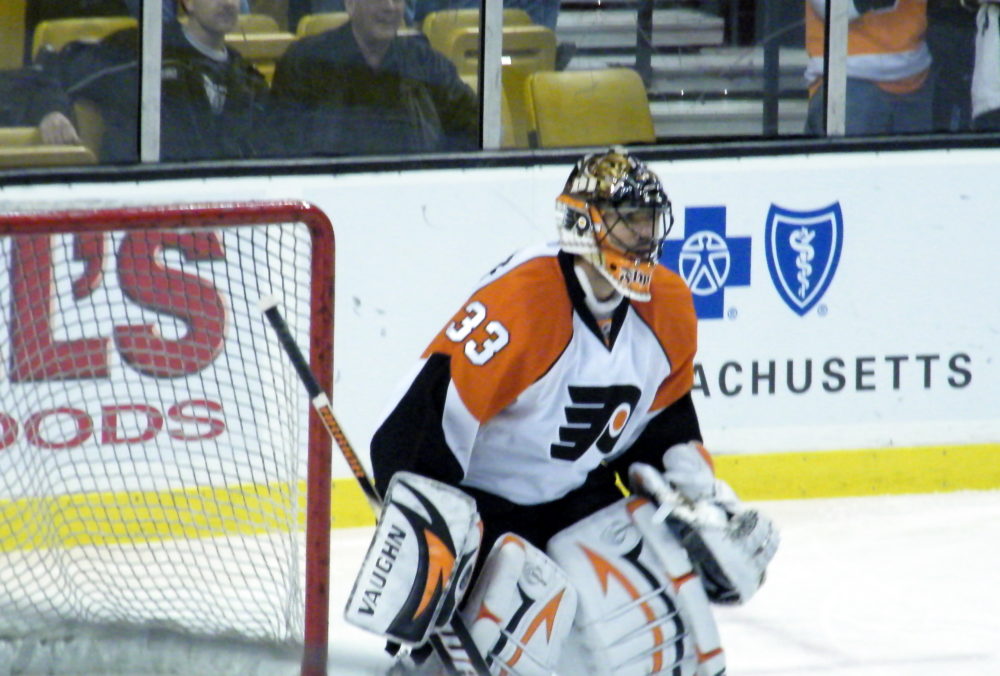 During this millennium, the Philadelphia Flyers have become a goaltender’s graveyard. Since Ron Hextall’s retirement after the 1998-99 season, the Flyers have gone through a bizarre and fairly unlucky shuffle of goaltenders with their fair share of drama. However, the narrative is oversimplified. The franchise’s success in the decade leading up to their appearance in the Stanley Cup Final in 2010 was made possible by short-lived success from five “flash in the pan” goaltenders who never sustained a high level of play for an extended period and failed to provide stability in the Flyers’ crease.

The Flyers drafted Brian Boucher in the first round of the 1995 NHL Entry Draft. After Hextall’s retirement, he entered the 1999-2000 season, competing with 36-year-old John Vanbiesbrouck, who was in the twilight of his career. A stellar 1.91 goals-against average (GAA) earned Boucher a spot on the NHL’s All-Rookie team and the starting nod for the Flyers entering the 2000 Stanley Cup Playoffs.

Boucher helped the Flyers advance in an electrifying run to the Eastern Conference Final. Most memorably, he made one of the greatest highlight-reel saves in NHL history against Patrick Elias of the New Jersey Devils in Game 3. However, Elias got the last laugh with a game-winning goal in the final minutes of Game 7 for the eventual Stanley Cup champs. Boucher played two more seasons in Philadelphia but never regained that momentum. He was dealt to the Phoenix Coyotes following the 2001-02 season to make way for emerging Czechoslovakian netminder Roman Cechmanek.

Philadelphia’s goaltending carousel really started when Cechmanek, a 29-year-old NHL rookie drafted in the sixth round the previous summer, stole the starting spot from Boucher in 2000-01. The rookie phenom posted a .921 save percentage (SV%) and 2.01 GAA. He finished second in voting for the Vezina Trophy and fourth in voting for the Hart Trophy behind Joe Sakic, Mario Lemieux, and Jaromir Jagr.

However, Cechmanek’s consistency issues began when he struggled in the Flyers’ opening-round series loss to the Buffalo Sabres in 2001. He posted comparable numbers over the next two regular seasons, but the team felt they could not rely on him in big moments. Tremendous flashy saves were often followed by soft goals that stunted their momentum, especially in the playoffs. He was traded to the Los Angeles Kings for a second-round draft pick in 2003.

Michael Handzus, a solid second-line center, was the major return in the trade that sent Boucher to Phoenix and cleared the way for Cechmanek. Goaltender Robert Esche was considered a secondary part of the trade and was expected to be the team’s backup. However, the unpredictable shuffle of goaltenders continued in 2003-04. Acquired veterans Jeff Hackett and Sean Burke both faded down the stretch for a team with Stanley Cup aspirations, and Esche became Philadelphia’s best option in net. He started 18 playoff games and finished with a .918 SV% and 2.32 GAA.

However, the Flyers suffered another tight loss in Game 7 of the Eastern Conference Final, and Esche never regained his form from those playoffs after the following season was canceled due to the lockout. He played two more seasons in Philadelphia but struggled statistically, proving to be yet another flash in the pan for a team who desperately needed a long-term solution in net.

Former Flyers general manager Paul Holmgren made sweeping roster changes in response to the team’s struggles during the 2006-07 season, the worst in franchise history. He acquired 29-year-old goaltender Martin Biron from the Sabres in addition to big names like Danny Briere, Scott Hartnell, and Kimmo Timonen.

Biron never became a superstar in the NHL, but he was considered among the best available goaltenders at the time. He was acquired in Feb. 20017, played out the stretch, and spent the next two seasons in Philadelphia. He was the full-time workhorse the Flyers were looking for with a .918 SV% in 62 games in 2007-08 and a .915 SV% in 55 games in 2008-09. The hallmark of his success was his solid performance during the Flyers’ return to the Eastern Conference Final in 2008, but emerging arch-rival Sidney Crosby and the Pittsburgh Penguins eliminated Biron and the Flyers in five games.

After another series loss to the Penguins in the 2009 Playoffs, the Flyers let the 31-year-old walk in free agency. They had recently signed bought-out goaltender Ray Emery to a one-year, $1.5 million deal, while Biron received $1.4 million on the open market. Although signing Emery didn’t work out well, the organization made the right decision to accept the short-term contributions of a veteran without forcing him into a role as a future building block. Biron was never a full-time NHL starter again.

Philadelphia’s goaltending carousel reached new heights after a series of goaltending injuries in 2009-10. Emery’s stint with the team ended quickly after he suffered a serious hip injury early in the season. Boucher, who returned for a second stint as the backup, also battled injuries as the team limped through a brutal first half that cost head coach John Stevens his job.

The Flyers then claimed journeyman Michael Leighton off waivers in Dec. 2009. His track record, which included four games with the Flyers in 2006-07, was underwhelming, to say the least. However, the team’s sudden turnaround under newly hired head coach Peter Laviolette wouldn’t have been possible without Leighton’s strong play between the pipes. The 28-year-old found a rhythm that helped the Flyers back into contention. He suffered an injury down the stretch, which turned the job back over to Boucher entering the playoffs.

Yet, the carousel didn’t end there. Leighton returned as the backup during Game 5 of the second-round series against the Boston Bruins, coincidentally the night that Boucher suffered another injury. He helped continue the Flyers’ historic comeback to advance after losing the first three games of the series. His heroics reached their peak with three shutouts in the Eastern Conference Final against the Montreal Canadiens.

Despite the integral role he played in the franchise’s most successful season of the millennium, Flyers fans will always associate Leighton with the disappointment of falling to the Chicago Blackhawks in the 2010 Stanley Cup Final. In Game 1, he was pulled after giving up five goals in less than two periods, and he infamously allowed a fluttering puck off the stick of Patrick Kane to squeak by him for the series-clincher in overtime of Game 6. He started just six NHL games following the devastating mistake.

The organization’s inability to replicate their success from 2000-10 in the past 11 seasons is in part because of their goaltending. They’ve experienced some colossal disasters between the pipes, including signing Russian goalie Ilya Bryzgalov to one of the worst contracts in league history in 2011 and starting an NHL single-season record eight goalies in 2018-19. However, Steve Mason played fairly well in parts of five seasons in Philadelphia from 2013-17 as a solid “1A” option in a goalie tandem.

The team was again plagued by goaltending issues in 2020-21 and finished with the worst SV% in the NHL. Carter Hart, even after a rough season, is still considered one of the league’s top young goaltenders. The Flyers hope that a rebound season from the recently extended Hart might be the beginning of the long-term stability in net that has eluded them for over two decades.

Colin Newby is a freelance journalist from Delaware County, PA covering the Philadelphia Flyers for The Hockey Writers. He is an encyclopedia of useless sports knowledge with an uncanny ability to rattle off Flyers goaltending stats from 2004 and every Stanley Cup winner during his lifetime. The depths of his knowledge stem from spending his entire life following the Flyers and the NHL, from fan favorites like the Legion of Doom and Claude Giroux to no-namers like Andy Delmore and Branko Radivojevič. Colin is an also an editor/co-expert for Broad Street Buzz, a Philadelphia Flyers blog through FanSided, and an author of fictional sports stories.