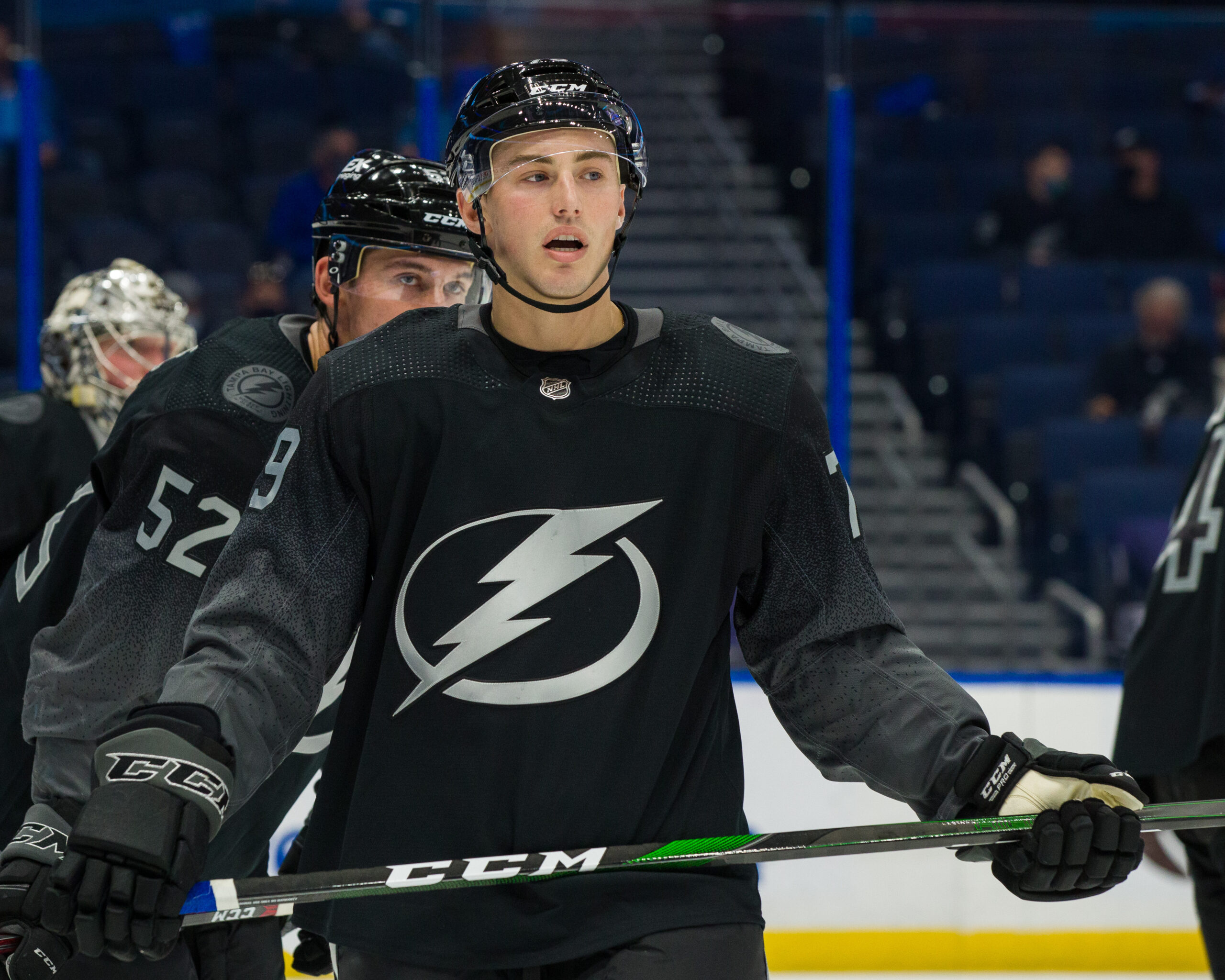 When you think of the Tampa Bay Lightning’s success over the last 10 years, much of it has been built on the back of players like Ross Colton. Those undersized forwards who may have been overlooked in a different era that play the game hard every night and force their way into a franchise’s future by simply being impossible to ignore on the ice.

As a fourth-round pick back in the 2016 NHL Draft, little was expected from Colton at first, but after a few strong seasons with the Lightning’s AHL affiliate, the Syracuse Crunch, he positioned himself as a potential call-up for the completely unique 2020-21 season. Even though he started as a member of the Taxi Squad, Colton quickly distanced himself from the Lightning’s other prospects, as he didn’t look out of place in their starting lineup. Through 30 regular-season games, he posted nine goals and 12 points, which were solid totals for a player taking on roughly 10 minutes of ice time each night.

After he scored the 2021 Stanley Cup-winning goal, there was reason to believe that Colton was on this same trajectory that made players like Tyler Johnson, Brayden Point, and Yanni Gourde stars in the NHL. However, the start of Colton’s sophomore campaign has been far less kind to the 25-year-old. Through his first 18 games, he has only posted one goal and three points while taking on more of a depth role on the fourth line alongside Alex Barre-Boulet, Boris Kathcouk, and Taylor Raddysh.

While he may not be scoring right now, Colton isn’t in the Lightning’s doghouse either. Head coach John Cooper is still relying on him to take on meaningful even-strength minutes, with 56 percent of his draws taking place in the offensive zone. With that even-strength ice-time, he is holding solid possession metrics, as he is sporting a Corsi and Fenwick For above 55 percent, meaning that while he is on the ice, the Lightning are controlling the puck more often than not while he is on the ice.

Colton is also averaging a little over 1:30 on the powerplay each night, where he registered two assists so far. However, given his lack of playing time on the penalty kill, Colton is mostly being asked to take on somewhat sheltered ice time, meaning that Cooper may be looking towards him to be more of an offensive sparkplug than a defensive stalwart right now.

This isn’t a bad idea, as even though he has been a stellar player early in his career, he is still relatively green when it comes to the rigors of a full NHL schedule. By giving him easier assignments while playing alongside fellow rookies he saw success with back in Syracuse, the Lightning are trying to set him up to succeed long-term by helping him work through this rough offensive start to his sophomore season.

Point’s Injury May Force Colton Into a Bigger Role

As a franchise that is in pursuit of their third-straight Stanley Cup, the Lightning find themselves fighting against the two strongest forces in hockey… injuries and the salary cap. After they lost many of their best depth forwards during the 2021 offseason, the team was looking a bit thin up front should injury strike.

Of course, less than 20 games into the season, Tampa Bay are now dealing with injuries to Brayden Point and Nikita Kucherov, wiping out 2/3rds of their opening night first-line.

With Point out of the line-up, it would make sense to expect Colton to take on a bigger role for the Lightning. As a natural centerman with a non-stop motor, he could be that unexpected fill-in who takes surprisingly well to increased ice-time. This may be the case, as in his first two starts without Point in the line-up, he averaged around 15:30 of playing time, which is up from the 10 to 13 minutes he was taking on most nights this season.

This ice time may be exactly what Colton needs to get out of his scoring slump. He can get more starts on the powerplay, which may allow him to chip in a few points while he continues to develop chemistry alongside his normal fourth-line minutes. If he starts to get going again, Cooper could then move him up the line-up, potentially into a top-line role to see how he plays alongside the likes of Steven Stamkos and Ondrej Palat.

So, there could be a lot riding on the next few games for Colton. If he can get things going offensively again while retaining his responsible play, it could be enough for him to further cement his role with the franchise even after Point returns from injury.

Eugene Helfrick is a Tampa Bay Lightning writer who is actually from Tampa Bay. He has written about the Lightning for six years, covering everything from their run to the 2015 Stanley Cup Final, to their crushing first-round exit in 2019, to their redemption in the bubble in 2020. While he is happy to talk about just about anything from cows to cars to video games, hockey will always remain one of his favorite pastimes.