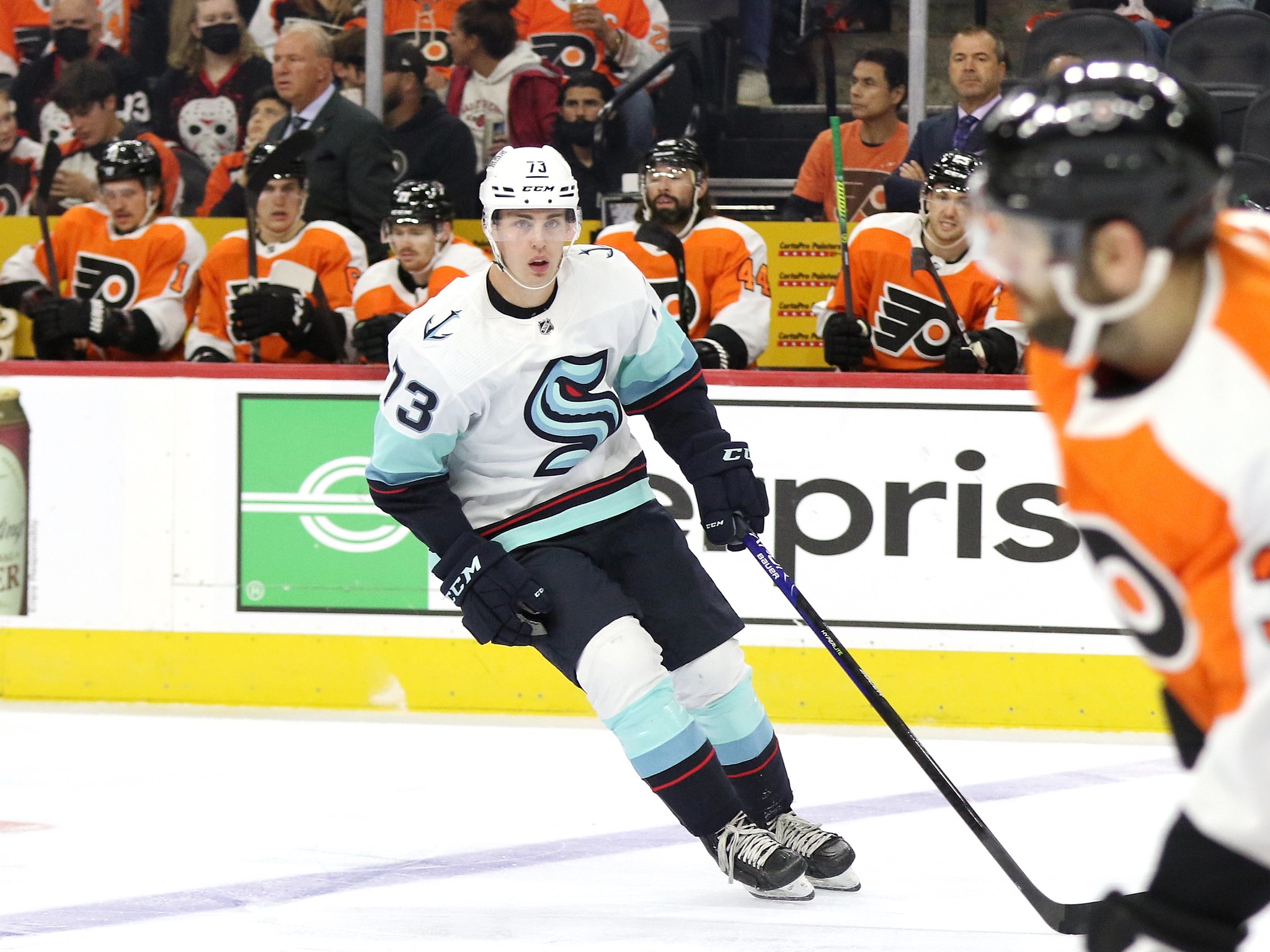 In this edition of Seattle Kraken News & Rumors, Kole Lind records his first NHL point, Jamie Oleksiak ties his career-long point streak and Joonas Donskoi moves within one game of tying his record for most consecutive games with an assist.

Lind recorded his first NHL point against the Edmonton Oilers in his third game as a member of the Kraken on Friday. Just over the halfway point of the second period, the 23-year-old forward, selected from the Vancouver Canucks in the 2021 NHL Expansion Draft, moved the puck up ice to a streaking Colin Blackwell. Splitting the defenders and roofing the puck on his backhand, Blackwell scored to give Seattle a 3-2 lead in the game, putting Lind on the scoresheet for the first time in 10 career games.

The majority of Lind’s season has been spent in the American Hockey League (AHL) with the Charlotte Checkers, where he has tallied seven points (two goals, five assists) in 17 games. His most recent stint with the Kraken comes after playing his first game with Seattle on Oct. 18 at the Philadelphia Flyers. On Dec. 1, he returned to the big league in the Kraken’s 4-3 shootout loss at the Detroit Red Wings. Friday night marked his first game playing at home in Seattle, and it was a big one for him and his team, who took down Connor McDavid, Leon Draisaitl and the Oilers by a score of 4-3.

Oleksiak has stepped up big-time in the absence of Kraken captain Mark Giordano, who last played in Seattle’s 2-1 win over the Carolina Hurricanes on Nov. 24 due to COVID-19 protocols. Oleksiak earned the game-winning primary assist on Alex Wennberg’s goal late in the second period to put the Kraken up, 4-2. For the first time since the 2018-19 season, Oleksiak is riding a four-game point streak, with five points (one goals, four assists) in his last four games.

In 56 games with the Dallas Stars last season, Oleksiak tallied 14 points (six goals, eight assists), tied for a career-high he set with the Pittsburgh Penguins in 2017-18. In just 24 games as a member of the Kraken, he already has 10 points (one goals, nine assists) and is on pace to shatter previous career highs. He is proving to be a highly valuable piece to the Kraken’s defense and stepping up when he is needed most as Seattle deals with injury woes. With more confidence and a bigger role on the Kraken, look for more of the same performances from Oleksiak going forward.

Donskoi Within One Game of Tying Personal Assist Record

Although Donskoi has yet to pot his first goal as a member of the Kraken, he is by no means slacking in his production. Instead, he is putting his skills to use as Seattle’s leading assists-getter, tying Jaden Schwartz with 12 assists. After recording a secondary assist on Adam Larsson’s goal midway through the first period against the Oilers on Friday, Donskoi has now recorded assists in four consecutive games. He is one game shy of tying his record of five-straight games with an assist, previously set in his first-ever NHL season with the San Jose Sharks in 2015-16.

The 29-year-old forward looks to tie his personal record on Monday, at home against the Pittsburgh Penguins. Donskoi is averaging an assist every two games through his first 24 appearances in a Kraken uniform. As he continues establishing himself as one of the key playmakers on Seattle’s roster, expect him to continue setting up an abundance of quality scoring chances for his teammates. He is also due for his first goal with the Kraken, so keep an eye out as it is likely to come soon.

The Kraken face-off against the Penguins on Monday at 7 p.m. PT, looking for its fourth-straight win at home. After welcoming McDavid and Draisaitl into Climate Pledge Arena on Friday, Seattle gets another opportunity to take on a generational talent in Sidney Crosby. The Kraken are just six points out of a wild card spot, so every point is crucial to keep it in the playoff race.

Tom Pepper is a diehard Buffalo Sabres and Seattle Kraken fan writing news and rumors columns at The Hockey Writers since June 2020.